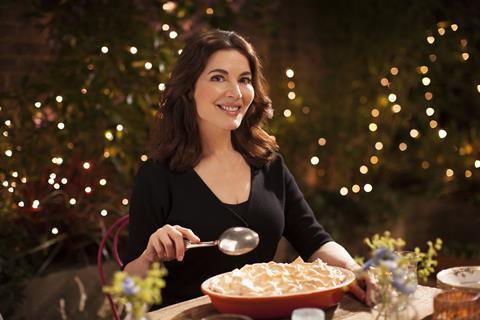 Nigella: At My Table, BBC2

“Her shows have had different names over the years. But they’re all basically Carry On Nigella. Double entendres served in dollops and firm peaks. The recipes, however, all looked breezily doable if sometimes requiring ingredients that don’t, as it were, grow on trees.”
Jasper Rees, The Telegraph

“Like a saucy sixth-former at St Trinian’s, La Lawson was simmering, pouting and sighing fit to make a strawberry tart blush. Every line was delivered as if it was X-rated, and most of them were.”
Christopher Stevens, Daily Mail

“There are, as last night reminded us, many things to love about Ms Lawson. She will, however, never convince me that the kitchen table is where the family should be spending all its together-time. Nor do chili, lime and salt belong on a melon. Sorry.”
Matt Baylis, Daily Express

“Most public figures would be mocked for suggesting everyone had a galette maker in the cupboard under their stairs, but Nigella is adored for her extravagance. And somehow she still manages to pull off simple recipes that even we kitchen paupers without garlic graters can make.”
Daisy Wyatt, The i

“It’s hopeless; there’s no point watching Nigella aspirationally. I’m never going to live like that. I need to accept that this is all way out of reach; just admire rather than aspire. I might give the eggs a go, though?”
Sam Wollaston, The Guardian

“Martin Shaw showed what a good actor he is in a scene of prolonged, sobbing, eye-bulging grief, alone with his fags and a bottle of whisky, even though he did have to deliver the odd stinker of a line. But it was a cleverly weaved finale, which at least ended Gently’s suffering.”
Carol Midgley, The Times

“A story, written by Shetland and DCI Banks scripter Robert Murphy, that delighted in exploring the Right-Left divisions of the time with cleverly topical nods to the politics of today. It was a sad but entirely worthy close to a series that despite many great qualities never quite got the acclaim it often deserved.”
Gerard O’Donovan, The Telegraph

“This series has always had strong parallels with the classic 1971 British gangster movie Get Carter. The final episode became a full-blown homage. This was a cut above the average George Gently mystery. All it lacked was Britt Ekland as the treacherous gangland moll.”
Christopher Stevens, Daily Mail