The Big Night In; Gangs of London

“It was just the cheering moment the nation needed” 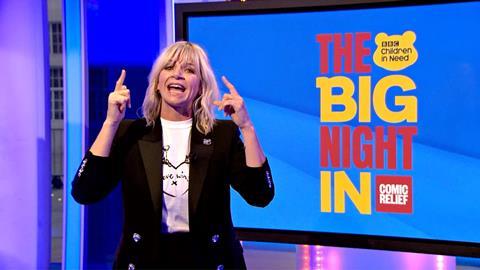 The Big Night In, BBC1

“Now that’s what we call event television. Not only did the country come together for a fundraising feast of entertainment but the Royal family made a surprise appearance on The Big Night In (BBC One) to show solidarity during the Covid-19 crisis. It was just the cheering moment the nation needed”
Michael Hogan, The Telegraph

“The technical nightmare behind such feats as the BBC Orchestra accompanying Matt Lucas singing Baked Potato from their separate homes doesn’t bear thinking about, but who can think about anything when Baked Potato is on?”
Lucy Mangan, The Guardian

“The Big Night In was a triumph for all involved and a solid night of entertainment for a nation bored, stressed, worried or still working on the front line. And we all learnt something new too, Prince William - who kicked off the live Clap For Our Heroes at 8pm - is a terrible actor.”
Emily Baker, The i

“There can never have been such a low-budget charity special on telly, but this combined effort from Children In Need and Comic Relief relied on genuine goodwill from the stars, not razzmatazz, to raise our spirits.”
Christopher Stevens, Daily Mail

“The most outrageously violent TV series I have seen in years and certainly the longest meat cleaver scene, but I seem to be fine with it. Barely a cushion held to the face. I think this is because the director Gareth Evans has succeeded in melding the tropes of martial arts, video games and slasher films so that one feels detached from the brutality.”
Carol Midgley, The Times

“Advance publicity declared that it was ultra-violent, and whether you see that as a boon or a drawback depends on how thrilled you are by the sight of a man hanging upside down from a rope at the top of a tall building, begging for his life, before the rope is set on fire and we see him burning to death. Or a bar brawl in which various people are glassed in the face or stabbed with darts, or a scene in which a man – already wading through blood in his wellies, having just dismembered someone in the bath – dies by having his neck thrust on to the sharp edge of a meat cleaver. If you like this kind of thing, well, Gangs of London is for you. I hated it.”
Anita Singh, The Telegraph