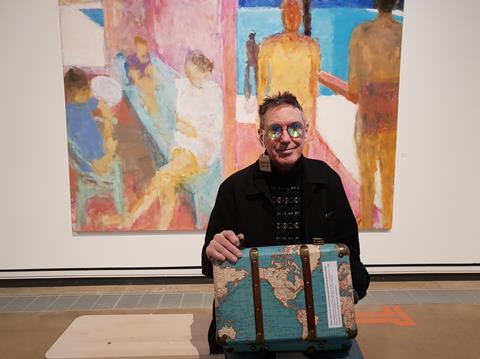 “Do you need good eyesight to create great art? That was the question at the heart of The Disordered Eye, a fascinating documentary by disabled artist and film-maker Richard Butchins. Along with challenging conventions, it put the spotlight on new ways of engaging with art. It was a vital reframing of disability in art that suggested inventive new ways of producing artworks for all.”
Gwendolyn Smith, The i

“Rarely for a documentary, it answered its own question categorically and without any fence-sitting. The presenter Richard Butchins led us to understand via various interviews how there are myriad ways that people perceive the world. If you’ll allow me a crass pun, this was a full-on eye-opener.”
Carol Midgley, The Times

“If there was a flaw in this bold and brilliant film, it was that disabled film-maker and artist Richard Butchins made his direction of travel too clear. However, moments like this did not reduce the overall power of a piece that made you think anew not just about art, about disability, about what we mean by each of those slippery terms, but also about the impulse to create and the ineradicable nature of talent and human determination when it comes to expressing yourself. A deeply necessary hour.”
Lucy Mangan, The Guardian

“The highlights were presented as a hit parade from No 40 to No 1, though Ade Adepitan was at pains to stress this didn’t mean some mattered more than others. He said this often enough to undermine the format. If you have to keep apologising and explaining, there’s something wrong with the system in the first place. But any excuse is good enough to see Catherine Tate again as petulant schoolgirl Lauren, barging into the Queen Vic and picking a fight with Peggy Mitchell.”
Christopher Stevens, Daily Mail

“In the grand Children in Need tradition, the show was a whiplash-inducing mix of deranged high jinks and hushed-voiced reminders of what the charity is really all about. I found myself welling up at footage of a young Doctor Who fan’s excitement when she got to meet Jodie Whittaker. Comic moments such as the sublime EastEnders/Coronation Street crossover elicited tears of mirth instead.”
Gwendolyn Smith, The i