“The stories that Bussell heard were interesting and so were the people she met along the way.” 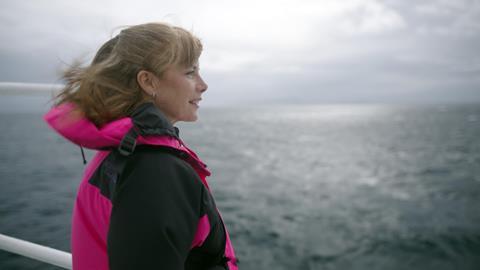 “It was a perfectly nice example of the genre, with the girlish former ballerina and Strictly judge gamely tackling the things that presenters of these shows are required to do, from wild swimming to weaving and joining a beach clear-up. The stories that Bussell heard were interesting and so were the people she met along the way. Bussell came across as the perfect guest – beautiful manners, kind and considerate, delighted by everything she encountered.”
Anita Singh, The Telegraph

“We were introduced to a dramatic landscape of mountains, rolling hills and stunning beaches. Having only enjoyed the countryside within a five-mile radius of my house for a year, these fresh vistas were borderline thrilling. Bussell was a delightful guide, interested in engaging with the world around her but maintaining a calm demeanour throughout.”
Emily Baker, The i

“She had a go at something called step dancing, which resembles Riverdance in tap shoes. Otherwise, this was an hour of adventures that would appeal to any nine-year-old boy, such as watching wild otters and clearing plastic debris off a beach.”
Christopher Stevens, Daily Mail

“Britain’s Lost Masterpieces was a jolly canter around the history of mannerism. The upshot, after an enjoyable meander round the houses, was that Tatton Park is now the only place in Britain where you can see a Francesco Salviati painting.”
Carol Midgley, The Times

“I’m always in awe of the scholarship and almost psychic powers of deduction that Bendor displays on this long-running art series. But this time he rather gave away the secret of the trick. I think most of us could work out the identity of a mystery painter if it were given in the catalogue.”
Christopher Stevens, Daily Mail

“In Undercover Police: Hunting Paedophiles detectives said that there was no stereotype of a typical offender. Then they presented Graham Marshall from Burnley who seemed to have come straight from Central Casting. Fortunately, Marshall had been caught in a police sting. The excellent documentary wrong-footed the viewer in the opening minutes.”
Carol Midgley, The Times

“Sitting through 90 minutes of Undercover Police: Hunting Paedophiles was gruelling. For the officers involved in this kind of work, the toll it must take is unimaginable.”
Anita Singh, The Telegraph

“It took a strong constitution to stomach this documentary and I’m sure those who managed to stick with it until the end will have the grotesque details rattling around our heads for days to come. Yet, for all my wimpish desire to look away, this was a staggeringly beautiful, poignant hour of TV that might, with any luck, keep our Government – as well as viewers like me – up at night, filled with a sense of urgency to do more about the havoc we’ve wreaked.”
Emily Baker, The i