TV Critics: Caligula with Mary Beard; Failed by the NHS

“From slim pickings, Beard produced an hour of richly entertaining television.” Read on for the verdict on last night’s TV. 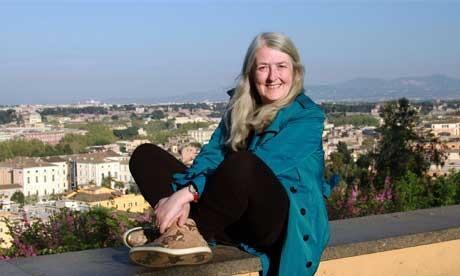 “To most of us, the third Roman emperor is famous for making his horse a consul and for sleeping with his sister. Previous screen depictions have taken those myths and run with them… In contrast, all Beard had to work with was a handful of coins, a water pipe, some stones and a chewed-up old shoe. Yet from these slim pickings, she produced an hour of richly entertaining television.”
Horatia Harrod, The Telegraph

“As we toured the myths behind the man, there were stunningly shot sequences of palace ruins and seats of power such as Capri: but the film was neither shallow nor po-faced.”
Alex Hardy, The Times

“In a piece for this newspaper a couple of weeks ago, Mary Beard wrote that the producers of her latest doc have helped her to ‘choose better words’… By and large, Beard’s new ‘better words’ are evocative and interesting. They disrupt the expected rhythms of historical documentary. They make it feel as if we’re not learning anything, while in fact the novelty is only making it all more memorable.”
Tom Meltzer , The Guardian

“The meaning of Caligula is something like ‘bootykins’ and saddling the man with that name for all eternity was a deliberate disservice by later historians. They painted him as a psychopath who committed incest with his sister, made his horse a senator and claimed he was a living god. Professor Beard didn’t try to prove Caligula wasn’t crazy but she did zoom in closely on the evidence.”
Matt Baylis, Daily Express

“Alas, the time eventually came for us to face the disappointing truth: ‘No ancient source ever says that Caligula made a horse his consul.’ Of course, Mary was bound by professional duty to deliver this bombshell sooner or later. We should see it as a mark of her essential good nature that she at least did so with an apologetic look on her face.”
Ellen E Jones, The Independent

Failed by the NHS, BBC3

“Failed by the NHS was a hard-hitting title for a disappointingly soft-pedalled investigation into the provision of mental health care to young people in Britain… Although Benjamin was a sympathetic listener, he didn’t get enough out of his subjects. With seven tales to tell, all relatively complex, there simply wasn’t time to get into the details of what had happened to each person.”
Horatia Harrod, The Telegraph

“Their sufferings were genuine and the courage they showed in discussing them was certainly memorable. The title their stories all came under, however, was far from helpful. The overstretched, cuts-stricken NHS might not have been able to meet their complex psychiatric needs. It did, however, give birth to them all, treat their childhood illnesses and broken bones and in all respects do a hell of a lot more, free, than the health system of any other country.”
Matt Baylis, Daily Express