My Dinner with Hervé; A Woman Captured; Celebrity Call Centre; For Facts Sake

“It lurched into sentimentality at times but was always hauled back from the brink by Peter Dinklage’s clever, caustic turn” 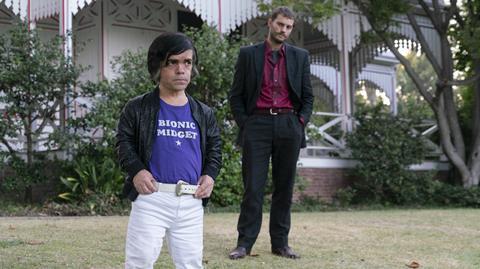 My Dinner with Hervé, Sky Atlantic

“Writer Sacha Gervasi took the bare bones of this story and spun a sad and satisfying tale. It lurched into sentimentality at times but was always hauled back from the brink by Dinklage’s clever, caustic turn which refused to allow you to feel pity for Villechaize and forced viewers to look beyond the often outrageous behaviour to the whole man.”
Sarah Hughes, The i

“Hervé Villechaize as written is a glorious part. What pulls the film out of shape is that it is structured to be Danny/Gervasi’s. An occupational hazard, perhaps, when you have a journalist writing and directing a film about his own interview, but one that should have been guarded against more zealously.”
Lucy Mangan, The Guardian

“The interviewer (played by Jamie Dornan) has been given his own issues to play with – alcoholism, a broken marriage and job uncertainty – which are granted a status equal to the grander disaster that is Hervé’s rise and fall. But however much Dornan throws himself into it, who in the end cares about a fictionalised journalist’s petty problems?”
Gabriel Tate, The Telegraph

“An outstanding, unforgettable documentary on modern slavery. This was standout TV for which director Bernadett Tuza-Ritter will doubtless, and rightly, win awards.”
Carol Midgley, The Times

“Vanity Fair has finished but Channel 4 gave us Banality Fair instead. They called it Celebrity Call Centre for Stand Up to Cancer, but I can’t honestly remember when I last watched an hour of such inane, barrel-scraping dross. To call it mediocre insults mediocrity.”
Carol Midgley, The Times

“The one question that cannot be answered is, what in the name of Albert Einstein is For Facts Sake doing on our screens on a Monday night? Brendan O’Carroll’s witless panel game might be the most stupid programme ever aired.”
Christopher Stevens, Daily Mail