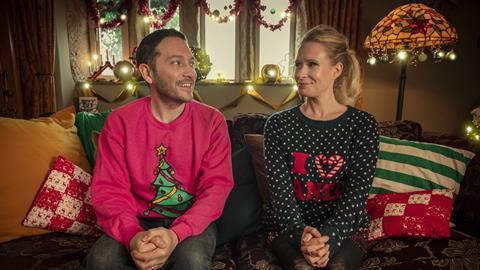 Going into bat against numerous full-length series, it was two Christmas special episodes of Jon Richardson and Lucy Beaumont’s Meet The Richardsons that bowled over the Broadcast judges.

Providing light-hearted relief for locked- down viewers over the festive period, the second episode averaged an audience of 568,000, which made it Dave’s highest-rating commission since Taskmaster: Champion Of Champions in 2017. The two episodes attracted average viewing figures of 534,000 and peaked at over 1 million.

In a move away from the panel show format for Dave, the quasi-fictional scripted comedy was praised for its originality and the natural chemistry exuding from its star couple. Such was its reception that when Line Of Duty writer Jed Mercurio was asked on a podcast about what show he enjoyed watching, the answer was Meet The Richardsons.

The superb writing and acting, combined with special guest appearances from Johnny Vegas and Jason Donovan, created a Christmas environment that was chaotic, funny and loving all at the same time.

One Broadcast judge praised the show’s “intriguing and unique tone”, adding: “What feels like familiar ground in its production and tone quickly gives way to engaging and inviting comedy, heart and family warmth we can all relate to.”

Another returned to the basics of comedy judging with an assessment that the programme “quite simply made me laugh the most out of all the shows submitted”.

The Danny Brocklehurst-penned comedy, based on the true life of co-creator and actor Joe Gilgun, was Sky’s most successful returning series ever. With authenticity paramount, much of the dialogue between the northern working class character ensemble is improvised around Brocklehurst’s scripts. This creates a tone far away from sitcom, more reminiscent of the best of British independent film.

Punching above its weight in terms of budget, Scot Squad attracts mainstream appeal and its viral successes has given the show reach beyond the borders of local broadcasting. A standout moment in the latest series was the Scottish police chief’s apology, which received over 19 million views on Facebook and was aired on Lorraine on ITV.

Already commissioned for a second series, the largely female writing and production staff covered issues including dating, going out, family, image, friends and growing up in the debut edition. Featuring stand-up comedy, sketches and celebrity impressions, it was ITV2’s second highest new season launch and won the 10pm slot on digital channels for 16-34s on several occations.

Based on Peter Foott’s lovable Irish rogues Conor MacSweeney and Jock O’Keeffe, the third series of The Young Offenders once again attracted compliments from the Broadcast judges who were impressed by its poetic, uplifting and funny tone. Completely filmed and set in County Cork, Ireland, the show embraces hard subjects such as teen pregnancy, bullying and grief.