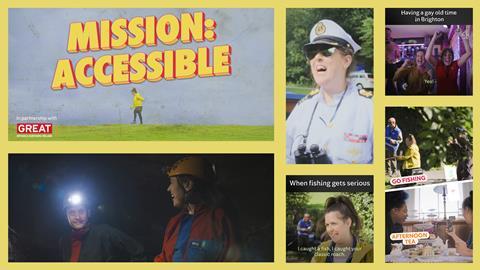 Partnering Visit Britain with Channel 4, Mission: Accessible followed hilarious comedian Rosie Jones on a journey across the UK to explore the locations and adventures accessible to disabled holidaymakers. The aim of this union was to encourage groups of disabled and able-bodied British travellers to explore the UK on short breaks, with Visit Britain’s slogan ‘Escape the Everyday’ at the forefront of the series’ format.

Having featured on shows including The Last Leg, Would I Lie to You? and 8 Out of 10 Cats, Jones’s star is very much rising and her experience and intelligence as a comedian means the treatment of contributors is grown-up, funny, respectful and provocative.

As well as its lead star having cerebral palsy, the content was made by one of the UK’s few disabled executive producers and indie owners, Stu Richards. That authenticity both in front and behind the camera helped the series generate over 9.7m views, 5.2m minutes viewed and over 81,000 engagements across Facebook, Instagram and YouTube.

With Jones accompanied by comedians Maisie Adam, Harriet Kemsley, Kemah Bob and James Acaster, Mission: Accessible’s joke-per-second ratio was consistently impressive. Road-testing the itineraries of four differently disabled contributors, the series was described as “doing the brief for Visit Britain, while being 100% funny and engaging”.

Another judge added it was “the best example of an innovative tie-up that has editorial and commercial benefits for all parties involved”.

This ‘Newsnight meets UK rap’ format brought together leading British artists such as Wretch 32 and Unknown T to discuss trending topics important to black British communities and raise awareness of audio brand Beats by Dr. Dre. Hosted in a Zoom format by Apple Music’s Dotty due to lockdown, the show centred around black culture and featured contributors sharing their personal experiences as they reflected on the world today.

Collaboration between the National Theatre, Sky Arts and Cuba Pictures ensured the stage play lived on in a production entirely re-conceived for screen. Premiering on Easter Sunday, Romeo & Juliet took consolidated 28-day viewing figures of 274,000 for Sky Arts and the production was also offered free to 76 schools with exclusive digital resources such as documentaries, video diaries and tutorials.

This playlist of video shorts provided contemporary perspectives on a range of topics, including science, history and psychology for a 18-45 audience. Published on BBC Ideas website OpenLearn and social platforms Twitter and YouTube, seven new films combined the OU’s academic expertise with playful storytelling and witty animation to encourage viewers to explore and discover more about the world and their place in it.

With the second part of the psychological thriller starring Jude Law originally being planned as part of the world’s first immersive television series on Osea Island in Essex, Punchdrunk’s creative and production team had to get to work in designing a novel approach to this element of the project. Teaming up with producer Nineteen Fifteen, a team of over 350 people created a 12-hour live theatrical broadcast filmed in one continuous shot that blended slow cinema with theatre.

Hosted by Maya Jama and Joel Dommett, Twofour worked with Virgin to bring the latter’s V Festival to the nation’s living rooms virtually from Hylands Park. Without a large, live audience, this was one of the first events to trial a small, socially-distanced in person audience – a huge test at a moment of national crisis and with a lead time from commission to transmission of only 12 weeks.