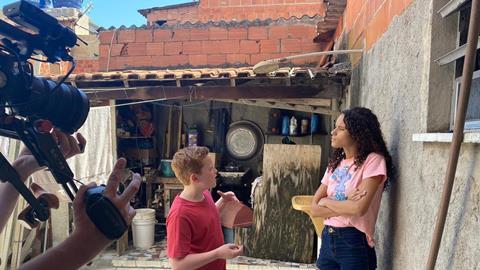 “I praise it for not patronising it’s audience and for its honesty,” were the words of a Broadcast judge on Sky’s news show presented by children for children.

For Your Info remains a platform for young people – putting its young reporters in control, letting them choose stories they want to cover and write their own scripts. Many stories come from viewers and more than 140,000 children have access to the weekly shows for home schooling, through free digital platform Education TV.

A standout story saw 11-year-old Braydon travel into the heart of Brazil’s dangerous favelas to explore the story of children being shot and killed. Long-term negotiations were needed between gangs and police to ensure Braydon and the team were safe enough to get a true picture of life there.

Judges felt the investigation raised the bar on how far children’s factual programming can go with child presenters, which was an brave and crucial step for this peer-to-peer series. Surrounded by crime, violence and poverty, Braydon was embedded in a world that few adult journalists ever get to experience.

The film highlighted the plight of Victoria, who risks her life going to school and has lost lots of friends to crossfire between police and local gangs. Highlighting social justice, child rights and the importance of education, one judge commented that FYI’s story was “a standout piece of journalism that will likely stay with the audience for many years”.

Following the adventures of Annie and her pony chum, It’s Pony became one of the top five animated shows on Nickelodeon and has been renewed for a second series, airing this year. Starring Jessica DiCicco, Josh Zuckerman and Abe Benrubi as Dad, the show has already been acquired by free-to-air broadcasters in Finland, Mexico and Ecuador.

Combining animation and live-action content, the adventures of four-year-old JoJo and her grandmother have struck a chord with young audiences. A CBeebies radio series has enabled audiences to consume new JoJo & GranGran content in a different format, via the CBeebies Radio Player, and a JoJo & GranGran Parcel Surprise game for the CBeebies website has proven popular.

Maddie, Space And You
Wonder Television for CBeebies

Utilising green screen filming, rockets, space footage and a rollercoaster ride, Maddie, Space And You explained the process and principles behind how rockets work and get into space. The content was self-shot at the National Space Centre in Leicester, after Covid thwarted access to the European Space Centre in Holland and meant the creative team were challenged with bringing rocket science to life – without visiting an actual space rocket.

What’s On Your Head?
Gold Wala for CBeebies

Doubling its audience after the first episode and outperforming its share slot, What’s On Your Head? was the result of a BBC Children’s brief for fast turnaround ‘Covid safe’ ideas that had diversity at their core. Inspired by young children seeing adults around them donning face masks, the show explored the different things people wear on their heads for religious, cultural, professional and safety reasons.