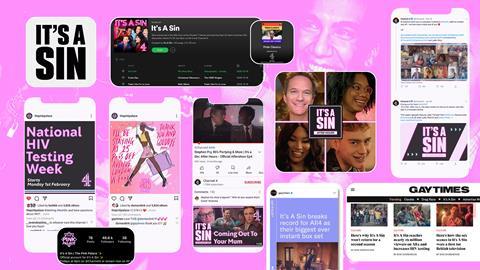 Best Digital Support for a Programme: It’s a Sin

Judges were unanimous that Channel 4 drama It’s a Sin deserved to pick up the gong for best digital support. Dedicated to its diversity quota, this tale of LGBTQ+ friendship under the shadow of the 1980s AIDS crisis was exactly the sort of programme to champion.

Daily content was dropped on Facebook, Twitter and IGTV, including character pieces, highlights and compilations to stimulate discussion and push digital viewing on All 4. Digital support included a content partnership with Gay Times and a 15-minute companion show It’s a Sin: After Hours for YouTube, Snapchat and All 4. This featured the cast and celebrity guests including Jade from Little Mix, David Furnish, Neil Patrick Harris and Stephen Fry.

A dedicated Instagram account offered exclusive behind the scenes content from cast and crew, as well as support for HIV/AIDS awareness, highlighting NHS England’s U=U (Undetectable) campaign. The success of the campaign meant many in the 16-34 age bracket were exposed to LGBTQ+ and HIV/AIDS issues for the first time and the Terrence Higgins Trust recorded a 300% uplift in HIV test requests in the weeks following the show.

It’s a Sin became All 4’s most binged series ever and most popular launch of all time. One judge praised how the digital support encouraged debate, whilst another said it was “an impressive campaign raising awareness of both the show and a sensitive subject”.

Reducing transmission to two episodes a week due to the global pandemic, Hollyoaks stepped up its digital push. Episode intros were shot with cast on-set to bring the archive episodes, dubbed ‘Hollyoaks Favourites’, to life. In addition, cast recreated iconic moments on TikTok, which secured over 800,000 views. In 2020, Hollyoaks also became the first soap to have its own Snapchat show with episodes re-edited to reach a younger demographic .

‘Pose Cam’ introduced a unique interactive element to the ground-breaking two-hour arts event broadcast during lockdown in May 2020. It enabled tens of thousands of people to fully engage with the programme through the Red Button to see an uninterrupted view of each model’s pose. By taking and uploading photos of their drawings they could then be featured for selection, with experts providing individual feedback.

With a linear TX on BBC iPlayer, there was plenty of time to build anticipation ahead of Drag Race’s UK version. Bespoke Instagram and Twitter social accounts enticed followers with stand-out moments from the show, while a partnership with Twitter allowed the audience to have weekly Q&As with the exited queens. ‘Meet the Queens’-themed films were also released across platforms and talent accounts, building a legion of fans ahead of the launch.

On top of Springwatch’s 60 live shows, a 24/7 live wildlife stream offering ran non-stop for four weeks. Over 80 films were publishing on the Facebook page over this period, which were a combination of socially optimised cutdowns of TV content, specially shot material, stories from live cameras and footage sent in by the audience. This content accrued 7.7m views, compared to 792,000 over the same period the previous year – an impressive 872% increase.

Twitter and The Masked Singer proved a match made in heaven. The #MaskedsingerUK hashtag took social media by storm and became a top trend on the platform in the UK. There were multiple related hashtags in the Top 20 every week, earning more than 20m views and 127m impressions. As well as the campaign playing out on Twitter in real time, the digital content punched through on Instagram and TikTok with younger fans and provided linear content for YouTube and Facebook.