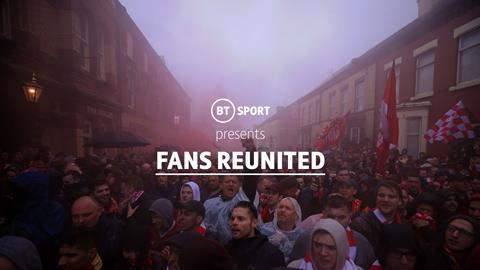 There was no shortage of praise from the Broadcast judges on how BT Sport adapted its sports content after the outbreak of the coronavirus pandemic. “The channel was brave and flipped its output from TV to digital as live sport disappeared off our screens,” said one. “BT’s innovative approach kept viewers engaged through a very difficult time.”

Judges were also impressed at how the sports channel listened to their fans and put their needs at the heart of the content. “I felt BT Sport really understood their audience, what they were missing about live sport and their changing viewing behaviours,” said another.

As part of its Fans Reunited strand, new series were introduced such as the feel-good Team Talk series, which featured interviews with the likes of Marcus Rashford, who surprised NHS heroes and the elderly.

Archive footage and remote cameras, talkback and cloud galleries were utilised to launch nostalgia-led series What Went Down, while The Beautiful Quiz was a synchronised play at home interactive quiz streamed live on YouTube presented by James Richardson.

The BT Sport Fan Park also provided an experience for up to 32 fans who were cast, engineered and produced by the digital team. Due to this innovation, content views went up 12%, minutes watched grew by 73% and between July and October and 30% of the UK population engaged with the BT Sport YouTube channel.

For the first time ever, Blue Peter was broadcast on both CBBC and CBeebies channels and iPlayer, as young kids applied for the chance to collect six badges. Each week, challenges were set during Blue Peter around the badges’ themes and the show received over 52,000 applications in just six weeks. There were also over 1m unique views of website pages, over 2m views of programmes and almost 10,000 user-generated content uploads of pictures and videos from kids.

Comedy Central’s social-first sketch series featured 14 acts whose aim was to keep the public entertained throughout lockdown. Stories ranged from Huge Davies employing black humour to tell people about the second life he’d created for himself in The Sims to Michael Odewale going to war against the pigeons hanging around his flat. Delivering 45 episodes, the series was Comedy Central’s top performing original content strand of 2020, delivering 9.5 m views and exceeding benchmarks by +216%.

Dave and Campaign Against Living Miserably: Masks
Dave for Dave

A post of a facemask with the slogan ‘If you can read this you’re too close’ picked up so much momentum that fans started asking if Dave could make the covering in real life. Dave used the opportunity to extend the channel’s brand partnership with Campaign Against Living Miserable, by uniting with them to create the masks and donating profits to the cause. The masks sold out within 24 hours and raised just over £17,000 for Calm.

Sky introduced digital video strand ‘Sky News Investigates’ to bring eyewitness and investigative journalism to a younger and more diverse audience. This was achieved by prioritising content for Snapchat, YouTube, and the Sky News website and app. An exclusive report from Italy in March 2020 was watched by 6m people on Snapchat, all under 35.