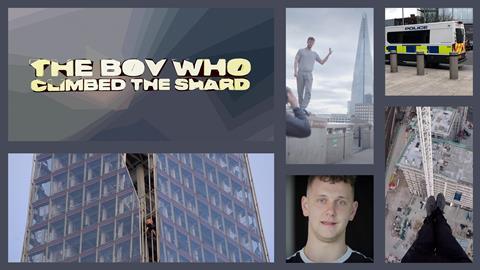 Best Short Form Documentary: The Boy Who Climbed The Shard

‘I was hooked from the start. It was thrilling and ambitious in its execution and the use of graphics was superb’

With very little footage of George King-Thompson’s audacious climb of London’s Shard, the main task for Parable was to bring life back into the momentous moment the 19-year old scaled the UK’s biggest building.

Combining King-Thompson’s UGC, this was successfully achieved by pulling together reconstructive footage on an iPhone and using a smartphone animation app to create a distinct, cartoon-like animation effect across the series. The graphics were singled out for praise by the judges, with one saying: “I was hooked from the start. It was thrilling and ambitious in its execution and the use of graphics was superb.”

Another added that the “highly engaging story” featured fantastic contributors, great imagination and spoke directly to a young, digital-native audience. As well as the climb narrative being neatly told, the film also explored how ADHD has affected King-Thompson’s life and inspired him to meticulously plan his daredevil antics.

The depth and jeopardy of the story helped to engage with a wide audience, with 15.4m minutes viewed across platforms and nearly 65,000 engagements. It performed so well it was published on All4, and Channel 4 and Parable are now nurturing King-Thompson for future projects.

Made over a 12-month period, with the first filming with King-Thompson taking place in November 2020, the film required complicated compliance and duty of care protocols due to the dangerous nature of his free-climbing activities.

I Was There
LADstudios for LADBible TV

I Was There 9/11 was crafted on a skeleton budget, with the concept going from slate to final delivery in under three weeks. Recalling the most infamous terrorist attack in history, the film was distinctive in the way it focused on those still affected, rather than on the attackers and events alone. The first episode achieved over 15m views across social platforms and generated mass conversation amongst Gen Z and millennials.

Averaging six minutes long, BBC Inside Cinema’s online video essays take you into the heart of cinema. The topics ranged from Tim Robey’s examination of the ‘Dolly Zoom’ camera technique as seen in classic films from Vertigo to Jaws, to Vice UK executive editor Zing Tsjeng’s close analysis of a harmful and prevalent on-screen stereotype of East Asian women – the ‘Dragon Lady’.

Off Limits: Do We Have A Problem With Afro Hair?
Sky News for Sky News on Snapchat, Sky News YouTube channel & Sky News app/website

Primarily made for Snapchat and YouTube, Off Limits enabled young journalists to pitch stories that put diversity and people at their heart. Sky’s Serge Rashidi-Zakuani story based around going to the barber’s raised questions about his identity and development. Published during Black History Month, the video was viewed nearly half a million times across digital platforms.

This collaboration between BBC Ideas and The Open University has so far seen over 30 videos produced as The Myth of Race challenges viewers to examine their assumptions of race. It explores how the concept of race came about and how it has been used and misused throughout the years. The film was published in January 2021 on the BBC Ideas website, where it attracted 62,000 plays, and on OpenLearn, the OU’s free learning website.

Commissioned by BBC Scotland’s Louise Thornton, Tune was developed, pitched, directed, produced and edited by new female director Lori Duncan-Allan. The doc is a light-hearted look at the journey of a well-known dance anthem and how it became synonymous with modern Scottish culture, despite being created in the Netherlands in the early 1990s.