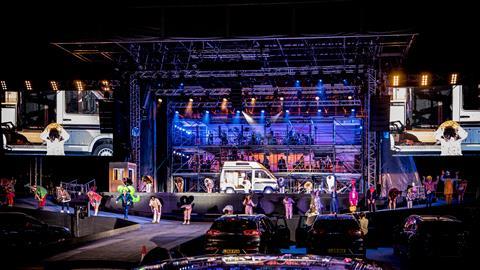 ‘It was a great advert for live arts events, and we need more like this’

Somethin’ Else for Sky Arts

This innovative event impressed the judges, who praised its technical and creative accomplishments.

The live TV production of a drive-in La Bohème at Alexandra Palace created a fully immersive experience with the English National Opera. Not only did Somethin’ Else’s team oversee the TV coverage, but also played a hand in conceiving the opera itself, with the goal of “capturing the intimacy of the performance and the excitement of the event”.

Over 750 shots were specifically framed, timed and scripted to ensure that every line, reaction and detail was captured and a spider cam covered the whole car park, to capture the spontaneous reactions of audiences from their cars.

La Bohème resonated with both opera lovers and non-opera lovers. Referring to its accessibility, one judge said: “As a viewer at home, you felt very included and connected to the live performance.” These sentiments were echoed by another, who added “it gave access to opera in a new and interesting way”.

The judges were particularly impressed by the circumstance in which the production was made, taking the opportunity to “push the boundaries to deliver something exciting” with an “outstanding” response to the difficulties the arts industry faced during the pandemic.

“It was a great advert for live arts events, and we need more like this,” enthused a judge.

Under strict Covid-19 safe conditions, this three-hour live YouTube original charted the hours before a live performance shot at Pinewood studios. Using multi-camera techniques to seamlessly combine the fluidity and unpredictability of a live environment, the programme shone a light on Nigerian singer’s Wizkid’s recording processes, inspirations and performing prowess, to the backdrop of the country’s END SARS social movement against police brutality.

Sunset+Vine set out to create a fresh and entertaining feel for the Nations Cup rugby final to be conveyed on screen with a comprehensive and creative editorial plan developed in just two months before the first match. The high standard of production, created during the Covid-19 pandemic with unprecedented logistical challenges was praised by the judges.

The Styrian MotoGP race was momentous, with Miguel Oliveira winning his first race and his team Tech3 winning for the first time in more than 20 years of trying. This occurred against the backdrop of a shocking crash the previous week. North One struck a careful balance between reflecting upon the incident with sensitivity, while also capturing the best possible live footage for viewers.

As Covid-19 halted the vast majority of sporting events, Super League Triathlon developed an innovative new concept that enabled athletes to compete in a Covid-secure environment. The programme was praised as some of the “most innovative new media to come out of lockdown” and harnessed technology to produce a real-life and digital format with Zwift interactive. “This could become a new virtual race of the future,” one judge concluded.

This 12-hour live broadcast blended slow cinema with theatre, to transport audiences from an episodic drama series to a long-form durational viewing experience, creating something truly unique. The event was watched by over 1.4m viewers on Sky Arts during a challenging period for television production and live theatre, with a team of over 350 people creating a gratifying, immersive experience.