“We got in Elton John an older, wiser, mellower rock star in lilac shades who laughed at his toupee and was commendably self-deprecating” 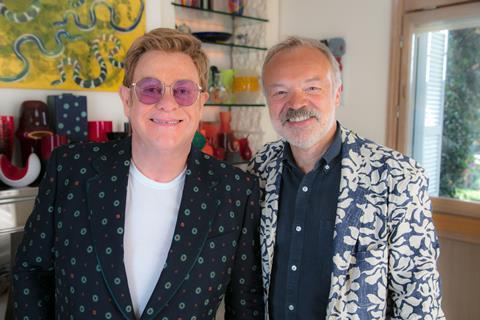 “I have never really cared for Elton’s music, although I did warm to him during this hour-long interview about his six-decade career. It wasn’t just because he was out and proud in the homophobic 1970s, but also because his self-satire cut through the treacle of Norton’s kneel-down-and-derriere-smooch interview technique.”
Stuart Jeffries, The Guardian

“This promised to be an hour of unedited, mischievous fun in conversation with Graham Norton. But it seemed that Fun Elton had left the building. Instead, this was a by-numbers retread of the star’s life and career pegged to the recent publication of his memoir. Promoting a celebrity’s latest projects, of course, is what chat shows are all about. But it was never really explained why the corporation was devoting an hour of BBC1 prime-time to this.”
Anita Singh, The Telegraph

“What we got in Elton John: Uncensored was an older, wiser, mellower rock star in lilac shades who laughed at his toupee and was commendably self-deprecating. Good for him, but obviously also, boo. Not even a tiny diva kick-off? From an Elton John PR viewpoint, it was a win and Norton was slightly more serious and fawning than usual.”
Carol Midgley, The Times

“Upright certainly played its own tune. It was far smarter and more deft than it initially seemed. This was a sharp-tongued but touching portrayal of flawed characters with complex family dynamics. The visuals were almost hallucinatory, like a grunge remix of Jane Campion’s The Piano, while it barrelled along with boisterous energy.”
Michael Hogan, The Telegraph

“If you’re after an irreverent buddy comedy, you won’t find it here. That’s not to say it isn’t funny, though – Meg’s constant threats to expose Lucky as a paedophile (which he isn’t) is not only consistently amusing, but also hilariously believable.”
Emily Baker, The i

“If the idea isn’t too original, the dialogue is. It’s jagged, fast and unsentimental, with a tendency to spiral off into philosophical arguments. Though it’s frustrating to see new comedy locked away on a pay-to-view channel, there’s no way the BBC would have made this show. It’s very…Australian.”
Christopher Stevens, Daily Mail