“Stein’s usual, pleasantly meandering style took a few meanders too many.” Read on for the verdict on last night’sTV. 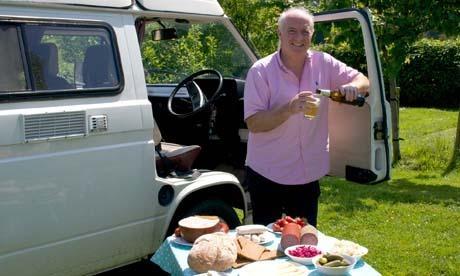 “Stein tried very hard to challenge the sauerkraut stereotype, recruiting his son for a time as he toured the country in a camper van. There were some tempting finds. I wanted to reach out and grab the pickled herring, and the white asparagus with ham and hollandaise prepared by Stein’s posh relatives even looked delicious. But the rest of it sat rather heavily in the stomach.”
Simon Usborne, The Independent

“German Bite was a German-clad reunion as much as a food show – and certainly contained the padding, awkwardness, and misplaced optimism of many a family gathering. Stein’s usual, pleasantly meandering style took a few meanders too many… It could have done with an edit of the efficiency that Stein’s host nation is famous for.”
Alex Hardy, The Times

“If this was meant to be a pitch for the joys of German cuisine, then it missed its target. Pickled herrings, smoked eel, corned beef, sauerkraut and gravy are an acquired taste… Nor did the programme work in its Who Do You Think You Are? format because there wasn’t enough time or breathing space for any of Stein’s German ancestors to come alive as characters… The one coherent theme was the faint sniff of xenophobia that seems to be part of almost any programme about things German.”
Sam Wollaston, The Guardian

“I was not entirely convinced by the culinary examples he used to back up his case, and given how little cooking he did throughout this show, I’m not sure he was either. As a tribute to an interesting, colourful, life-loving nation and an insight into Stein’s own past, however, this was five-star stuff.”
Matt Baylis, Daily Express

Tales from the Royal Bedchamber, BBC4

“Lucy Worsley has the great gift of being both informative and informal at the same time and this romp through the royal bedrooms was another of her charming sideways looks at history… This was television history at its best. A big idea – the bedchamber as centre of power, great stories of kings and queens and a telling eye for detail.”
Sam Wollaston, The Guardian

“Worsley nimbly and efficiently remembered that the programme had been commissioned because it had a promising air of smuttiness. She injected sex and bottoms into the chat on a regular basis and playfully crawled under the covers in a number of sumptuous beds wearing a fascinating parade of nightwear.”
Adrian Michaels, The Telegraph

“Lucy Worsley, chief curator of the Historic Royal Palaces, was our intrepid and relentlessly jolly guide… Most illuminating, given the contemporary hysteria around a certain boy George, was a newspaper clipping Worsley clutched. It reported, in passing, the arrival of a Victorian baby. ‘The Queen was brought to bed after an indisposition of a few hours.’ It’s enough to make a republican nostalgic.”
Simon Usborne, The Independent

“What a forceful portrait of a community where grief layers upon grief… Happy it isn’t: but it gets you in the gut like a bass guitar.”
Alex Hardy, The Times