Nigella’s Cook, Eat, Repeat; My Family, the Holocaust and Me; The Crown

“Her latest show is as comforting as ever, the television equivalent of sinking into a heavenly bath” 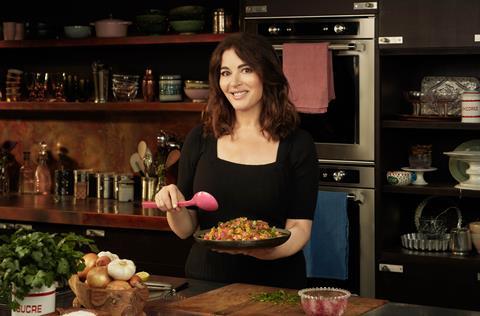 “Her latest show is as comforting as ever, the television equivalent of sinking into a heavenly bath. I’m not convinced her fish finger bhorta would be any tastier than a fish finger sandwich in sliced white, but to watch her purr about the ‘gold fire’ of the mustard and the ‘essential rhythms’ of frying onions was transporting. After the year we’ve had, a fantasy escape is exactly what we’re craving. Welcome back, Nigella. Your country needs you.”
Anita Singh, The Telegraph

“It’s been three years since Nigella Lawson last purred seductively from her covetable kitchen, and Nigella’s Cook, Eat, Repeat looks set to be one of her best. A less deft presenter might struggle to replicate the charms of the book on the small screen, but there has always been a poetry to Nigella’s presenting and that was evident from the very beginning of this series. An indulgent, comforting, sensory delight – what a treat to have her back.”
Sarah Hughes, The i

My Family, the Holocaust and Me, BBC1

“It is a remarkably moving endeavour, although, given its subject, that is hardly surprising. Rob Rinder is a wonderful host and an enthusiastic interviewer, which must stem in part from his legal training. He is skilled at asking the right question at the right time and getting to the heart of a story. As survivors of the Holocaust diminish in numbers, this is a vital history lesson.”
Rebecca Nicholson, The Guardian

“It is a moral imperative that we hear exactly what happened to victims of the Holocaust. Yet even when you know the stinking depths of evil that the Nazis plumbed, the detail never fails to floor you; the horror never grows old. It felt right that all these years later these facts were spoken on television, the evil aired for us all to hear. Bleak and vital television.”
Carol Midgley, The Times

“As Rinder aptly concluded after a powerful, emotional and timely hour’s television, it was hard not to feel that what we were watching was ‘the most articulate expression of human evil’ that could be imagined.”
Sarah Hughes, The i

“As Netflix’s lavish, engrossing, cast-shuffling juggernaut moves into the late Seventies and introduces the two women who defined an era – Prime Minister Margaret Thatcher (Gillian Anderson) and Princess Diana (Emma Corrin) – this drama and its scrutiny of history feels more absorbing than ever. If series three, with its new cast of Olivia Colman, Helena Bonham Carter and Tobias Menzies, was 10 episodes of dawdling PR for the Royal Family, then this series is a forensic, fast-paced attempt to get under their skin.”
Emily Baker, The i

“With the arrival of series four, Palace aides may want to quietly cancel the Netflix subscription. Remember those Windsors you loved in seasons gone by? Tragic Margaret, soulful Charles, feisty Anne? All are transformed into raging snobs and bitter husks. Even the Queen is hard to love. But the real star of this fourth season is, inevitably, Diana. How daunting it must have been for Emma Corrin, an unknown actress barely out of university, to take this on. But the casting is perfect: she grows into the role – and the accent – just as Diana grew into the role of princess.”
Anita Singh, The Telegraph