“It has all the makings of a classy package, and, by and large, it lives up to its promise.” Read on for the verdict on last night’s TV. 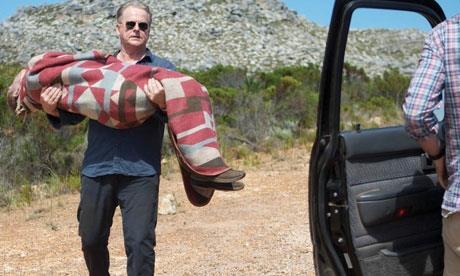 “This story of a hostage negotiator who has gone off the boil is written by a veteran of 24 and ER, Patrick Harbinson, and has pace, realism, as well as attempts at psychological and political insight.”
Andrew Billen, The Times

“It’s a proper thriller – grabs you by the goolies and drags you along at 100mph. Except that suddenly it stops, on a cliff-edge, with two more parts to come. I think I know where we’re going but count me in – I’m coming too.”
Sam Wollaston, The Guardian

“Some parts of the plot looked as if they’d come off the supermarket shelf marked dried-out clichés but for all that it was still rather exciting.”
Matt Baylis, The Express

“Kidnap and Ransom has all the makings of a classy package, and, by and large, it lives up to its promise.”
Alice-Azania Jarvis, The Independent

“It is television to gawp at, not an anthropology lesson, however, and the script protested too much in explaining what the World Surfing Championships were doing in the mix.”
Andrew Billen, The Times

“It’s not especially intelligent television. You’re not really learning anything. What you are doing is gasping, at the beauty and the wonder of the old planet. It’s coffee-table television, and at that it is very good.”
Sam Wollaston, The Guardian

“Hugh had his preaching guns fully loaded. And you know what? It was fine. Good, even. Great. The final episode of his crusade to bring ethics to the fishing industry focused on the grim – very grim – conditions on salmon farms.”
Alice-Azania Jarvis, The Independent