“Urban charted successive tours that switched tactics every six months.” Read on for the verdict on last night’s TV. 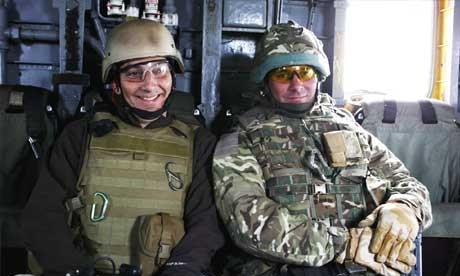 Afghanistan: The Battle for Helmand, BBC2

“Urban did not end by telling us that it was time to get out. We are getting out anyway, in 2014, leaving our gains to an Afghan military, which he moderately observed, would have to “deliver a much better performance than up to now.”
Andrew Billen, The Times

“Urban charted successive tours that switched tactics every six months, rarely making progress until last year when the Americans kicked out the Brits from the towns they had sacrificed lives to defend.”
Simon Usborne, The Independent

“Melody and her team leader, Zoe, had a shouting match in Asda as a prelude to convincing the store to take their new “snap and share biscuit”.
Andrew Billen, The Times

“How could he fire Zoe? The only person on it who isn’t a sociopath? I feel sure this is some elaborate set-up, where Melody is kept in just so she can be unmasked at the very end, in a post-modern echo of Scooby-Doo.”
Zoe Williams, The Guardian

“None of it was particularly surprising except for a brief period in the Seventies when in midst of industrial unrest and economic turbulence the Labour government decided the country did not have enough hotel rooms.”
Matt Baylis, The Express

“York flirts with the camera so winningly I got face-ache from accidentally smiling at him. Frank Spink, archive researcher, was the backroom star; without the clips of the deluxe hotels of yore, the beehives and tinned vegetables, the wonderful dancing that used to be a universal skill, like texting, this may have been a bit stodgy.”Zoe Williams, The Guardian

“It’s the kind of mix that’s been served up by every one of its seven series and although it’s often well acted and written, you have to wonder who its hard core fans are.”
Matt Baylis, The Express

“If I hadn’t seen it before, it certainly felt like it. Top Gear must be the BBC’s most repeated show (and one of its most lucrative), as any occasional Dave viewer will attest, but it’s also surely its most repetitive.”
Simon Usborne, The Independent