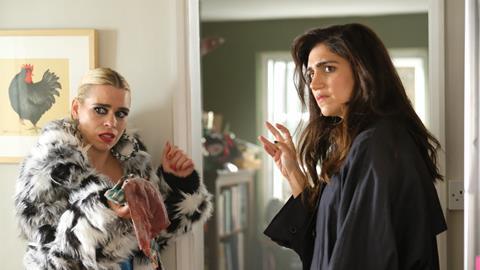 Divided into eight different emotional states, I Hate Suzie is a deep dive into what happens to a successful woman when she is exposed to the world and finds herself in a moment of profound crisis and change.

Written by Lucy Prebble and starring Billie Piper, each episode had its own directorial and design style, but the overall voice and spirit remained true to the greater whole. Grappling with her marriage, career and position in the world, Suzie was presented as complex, contradictory and unpredictable and yet there was always a feeling of authenticity and originality behind the character and her behaviour.

With a strong authorial voice and direction, I Hate Suzie didn’t just have something to say about one women’s struggle but also about the world and the position of women within it.

One Broadcast judge commented that the Bafta-nominated series was “innovative, funny, sad and crazy” and managed to portray the imperfections of life in a “beautiful manner”. They also praised the amazing performance of Leila Faraz as Naomi, Suzie’s best friend and manager.

Another judge extolled the bravura central performance from Piper and the way the series addressed numerous issues with wit and charm. “In a strong, competitive set of entries, I Hate Suzie delivered in all respects with its writing, storytelling and execution,” they said.

A Discovery Of Witches
Bad Wolf for Sky 1

Adapted from the All Souls Trilogy by Deborah Harkness, the second series of Sky1’s drama travelled through time to Elizabethan England and searched for the origins of magic. Exploring how the world looks at the neurodivergent, the key to the production was inclusivity, which included the use of blind casting and a profoundly deaf actor in a main supporting role. The season was the most binged show on Sky’s on-demand service, with over 5m downloads in its first week.

Gangs Of London
Pulse Films and Sister for Sky Atlantic

Created by Gareth Evans and Matt Flannery, this modern-day crime drama following the struggles between rival gangs was described by Empire magazine as “intensely cinematic in a way that is rare for British TV”, adding: “The British gangster thriller has never seen anything like this before.” With very high approval ratings on critics sites, Gangs of London is Sky Atlantic’s biggest original drama launch of the past five years.

In My Skin
Expectation for BBC3

One Broadcast judge declared In My Skin asthe unsung hero of BBC Three, and a series no other UK channel would make. The story centres on Bethan, a Cardiff schoolgirl who is hiding the reality of her chaotic home life from her school friends. The all-female editorial team included writer and executive producer Kayleigh Llewellyn, executive producer Nerys Evans, director Lucy Forbes and producer Sophie Frances.

Emily Burns quickly turned around a 90-minute screenplay from Shakespeare’s text when the National Theatre was forced to cancel its stage play in summer 2020 due to Covid-19. Director Simon Godwin worked closely with cinematographer Tim Sidell to create a production reconceived for screen which could be shared with audiences. One of the NT’s stage spaces was converted into a film studio, with shooting taking place over 17 days in December 2020.

Save Me Too
World Productions for Sky Atlantic

Creator, writer and star Lennie James felt it was vital the second series of this truly British series told a story “without the usual tropes people use to talk about the poor and impoverished and estate communities”. This resulted in a depiction of the working-class community in all of its characterful splendour, warts and all.