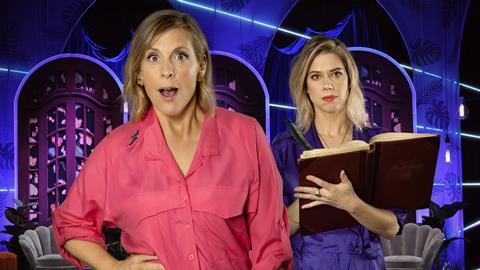 ‘It’s great to see two female hosts, and Mel and Lou are a joy to watch’

Outrageous sins, lies and legal transgressions were the order of the day in a format that quickly found its feet on Dave. Its slate of comedian and celebrity confessions struck a chord with audiences, registering a seven-day consolidated audience of 457,000 adults, which was a +132% rise on the 52-week benchmark.

This translated to a consolidated viewing share of 3.07%, cementing Dave as the number one non-terrestrial owned channel across the 10pm time-slot on the night of launch.

The presenter line up of Mel Giedroyc and Lou Sanders impressed the Broadcast judges, with one claiming it was probably Giedroyc’s best work: “Her chemistry with her co-host is brilliant – it’s fantastic storytelling.” Another added: “It’s great to see two female hosts, and Mel and Lou are a joy to watch.”

A third judge praised the show’s originality, humour and lack of smugness.

By trusting the duo to push boundaries with their comedy, producer Expectation allowed Unforgivable to make jokes about the patriarchy rarely found on male-fronted panel shows. Already having persuaded the likes of Graham Norton, Jennifer Saunders, Richard Ayoade and Gemma Collins to battle to be crowned Unforgivable, the show has been recommissioned.

Hosted by poet Benjamin Zephaniah and filmed at Battersea Park Bandstand, Life & Rhymes is a unique celebration of spoken word performance. As well as more established talent, wannabe poets got the chance to perform onstage, making it the first show of its kind in the UK. Over four episodes, poets explored the biggest topics in the world, including racism, gender, sexuality and mental health.

Adapted from an NBCUniversal format, this dating show sees singletons embark on dates whilst several pairs of comedians provide their unique commentary on proceedings. More established talent such as Daisy May Cooper and Josh Widdicombe featured alongside up and coming talent including Abi Clarke and Maddy Lucy Dann. Paired with their real friends, the comedians were comfortable enough to give an insight into their own dating histories, while gently poking fun at the contributors.

Featuring the first all-black, all-female line up on a British panel show, Don’t Hate the Playaz is a mainstream show for a young diverse audience with entertainment, comedy and music at its heart. Running for three series on ITV2, celebrities including Dizzee Rascal, Katherine Ryan and Big Narstie have battled it out for bragging rights on the hip hop comedy quiz.

This Sky 1 production saw comedians Rob Beckett and Romesh Ranganathan wrestle with scenarios completely outside of their comfort zones. Due to Covid restrictions, producers on the most recent run were tasked with filming everything in the UK, while delivering the same level of scale and excitement. This was done by choosing areas such as art and drag culture that considered to be strongpoints for Britain.

Hearing Reading-born artist D Live rap with passion about the broadcast of the ‘n-word’ in a news report was one of the highs of series two. The series regularly trended across social media, including several viral moments. Diversity continued to be at the show’s heart, with 92% of on-screen talent black, Asian or minority ethnic and most of the cast coming from outside the M25 including Leeds, Birmingham and Paisley.