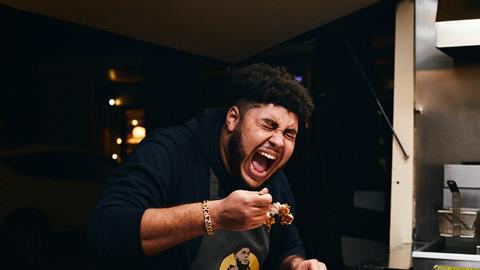 The star puts a unique spin on his show, and makes it stand out from the smorgasbord of other cooking productions

With nominations across television’s main awards shows, Big Zuu’s Big Eats has received plenty of plaudits for its originality and diversity and has now won Broadcast’s Gamechanger of the Year gong.

Travelling around the country to cook for special celebrity guests, grime artist and self-taught cook Big Zuu has carved out a special niche for himself to attract a solid fan base on Dave. Combining comedy and cooking, as well as musical influence, the star puts a unique spin on his show, and makes it stand out from the smorgasbord of other cooking productions.

With an average audience of 135,000 over seven-day consolidation, the show has brought significant numbers to Dave. It has reached over half a million 16-34 viewers in total, making it one of Dave’s strongest shows within the important age bracket.

The critics have paid many compliments to the chef, including the Daily Telegraph calling him an ‘engaging host’ and the Daily Mail writing he has ‘a very natural way of talking to people’.

Capitalising on the show’s success, Big Zuu now offers viewers his very own cookbook, that holds the recipes from the show. With further franchise opportunities available, and a second series and YouTube series on the way – Big Zuu’s Big Eats is undeniably gamechanging for Dave.

Filmed under strict Covid controls, poet Benjamin Zephaniah kicked off this brand-new series from the bandstand at London’s Battersea Park. The first-of-its-kind spoken-word performance show embraced established talent and gave wannabe poets a chance to join the performers onstage with an open mic session. Poems featured on the show included a love letter to prime numbers, a love story straight from the Louvre and a moving tribute to Windrush victim Paulette Wilson.

A unique blend of scripted, reality and archive helped to create a programme that feels completely authentic and had viewers unable to spot the hands of the writers and producers. During the Christmas specials, the show continued its enjoyable mock-doc format and the two episodes averaged an audience of 1m. It was also Dave’s highest-rating December commission since Taskmaster: Champion Of Champions in 2017.

Over 350 people beavered away on this 12-hour as-live broadcast, which blended slow cinema with theatre, transporting audiences from an episodic drama series to a long-form viewing experience. The Third Day: Autumn was watched by over 1.4m viewers on Sky Arts in the UK and over 500,000 people around the world on Facebook – Sky’s largest ever audience for a Facebook Live broadcast.

This highly acclaimed six-part reality competition was created to inspire more women and girls to get involved in football on and off the pitch. Presented by former Chelsea, Juventus and Lioness player Eniola Aluko, the next series is in pre-production and will see 26 women – from across the world – train at St George’s Park and compete for the chance to become the next female football superstar.

We Hunt Together
BBC Studios for Alibi

Described as ’both unsettling and refreshing’ by The Daily Mail, We Hunt Together is a fantastically layered cat and mouse drama that puts a fresh spin on your everyday psychological thriller. The ever-present neon lighting represents the show’s key themes and unique tones, which simultaneously invites the audience into the dangerous and beautiful story featuring Eve Myles, Babou Ceesay, Hermione Corfield and Dipo Ola.