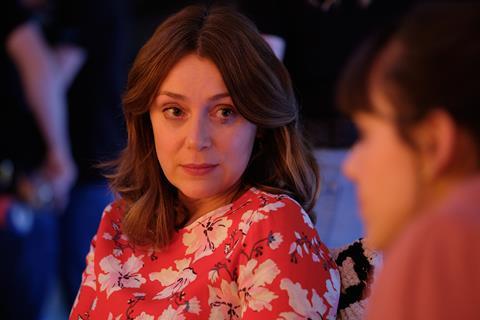 “ITV’s new Sunday night comfort drama offers a tender-hearted rumination on life after death. Keeley Hawes’ ability to switch between pissed-off, devastated and all the shades of emotion in-between was a marvel and a testament to her place as one of the UK’s best actors. Finding Alice is a rather gentle affair so far and a charming way to spend a Sunday evening.”
Emily Baker, The i

“Roger Goldby and Simon Nye’s script, while unexpectedly funny in places, was also quite slow at times. But blimey what a cast. Hawes is the kind of actress you could watch reciting if not the phone book, then certainly the operating manual of a high-tech fridge. Yes, some of the plotting mechanics may have felt slightly shopworn, but its spirit and bright tone felt strangely (and pleasingly) authentic.”
Ben Dowell, The Times

“Hawes is an impressive actress and here she was impressively good at portraying a bereaved woman trying to navigate her way through the horrible practicalities of grief and dealing with a sudden death in the family. But what is this show supposed to be, exactly? A thriller that veered at times into sitcom territory, it sometimes seemed as if the producers had thrown elements of Grand Designs, Parasite and Cold Feet into the cement mixer and slapped the results on screen.”
Anita Singh, The Telegraph

“Finding Alice is Ab Fab, converted from a sitcom into a darkly witty thriller. There’s champagne, darling, and endless rows in the kitchen, and a queue of brilliant supporting stars. Nobody smokes, because it isn’t 1993 any more, but everything else is perfectly in place. Writers Roger Goldby and Simon Nye set up the story and introduced the all-star cast in a rattling series of scenes that quickly had me hooked.”
Christopher Stevens, Daily Mail

“There are good, funny lines scattered throughout, as you might expect from a Simon Nye script, but their sudden deployment generally just adds to the sense of unevenness. This may partly be a result of the broken-backed filming and production time caused by Covid and lockdown conditions, but the result is unsatisfying.”
Lucy Mangan, The Guardian

“This contest always carries a delicious frisson of danger, since a fall can result in serious injury. So it proved as the Bambi-like beginners slipped and skidded, often crash-landing with a wince-inducing bump. What Dancing On Ice lacks is Strictly Come Dancing’s slickness, warmth and ability to suck viewers in. This launch show also laboured with a lack of pace and momentum. Amateur political pundit Rufus Hound will do his bit but the format needs to sharpen up too.”
Michael Hogan, The Telegraph