“Most of the attempts at jokes floated high and wide, like shots over the crossbar from 30 yards out” 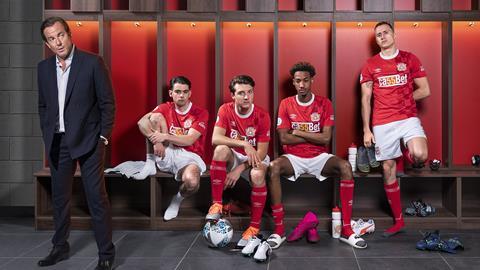 “Writer Iain Morris has said that the idea came to him in part because of a chance meeting with an ex-player who filled him in on the banal reality of this life. It’s brave to try to write a comedy that leans heavily on a relatively repetitive existence and this never quite transcends that problem. There’s only so long you can watch people sitting around talking and playing Fifa because there’s nothing else to do, even if a number of Twitch stars’ revenues would suggest otherwise.”
Rebecca Nicholson, The Guardian

“Most of the attempts at jokes floated high and wide, like shots over the crossbar from 30 yards out. There was no rhythm, and far too many characters … more than 20 names on the cast list for the first episode, and that’s before you count the real-life celebrities such as Liverpool manager Jurgen Klopp. The First Team just isn’t ready for the big time. Back to the training ground.”
Christopher Stevens, Daily Mail

“The German Bundesliga and reruns of classic matches have been trying valiantly to fill the football-shaped hole in our lives. Could new pitchside sitcom The First Team (BBC Two) further plug the gap? No, it couldn’t. Viewers were left sick as a parrot, rather than over the moon, Clive.”
Michael Hogan, The Telegraph

“Here was an emotionally literate man tackling a subject that is hugely important, given the high rate of male suicides. It is obvious that his immense privileges and impending crown mean that he can never be like the young men he interviewed about their depression and anxiety, but he tried very hard to be, attempting banter about football and not always succeeding, drinking pints in a pub with Frank Lampard, and saying he liked a cheeky Nando’s.”
Carol Midgley, The Times

“At one point in his film, William offers a view about why men are shy about “opening up”, putting it down to the experiences of generations who went through the “atrocities, the grief and the sadness” of two world wars, and who had to internalise their problems. It’s probably nonsense, but it’s as good an explanation as any I’ve heard.”
Sean O’Grady, The Independent

“The documentary followed the Duke of Cambridge as he campaigned to get more men talking about their problems, using the medium of football to reach as many of them as possible. It showed him to be hard-working and dedicated to a cause close to his heart.”
Anita Singh, The Telegraph

“How to decide who should be crowned Britain’s best parent? Oh, I dunno. Maybe by instantly disqualifying anyone who enters themselves in a programme called Britain’s Best Parent? A show in which their children are exposed to the viewing public and then a judgey studio audience votes for a winner? Or am I being démodé?”
Carol Midgley, The Times

“The show was most problematic with five-year-old Willow, raised to be ‘gender-fluid’ by his single mother, Joana. Sensitive Willow seemed too young to be taking part: he curled up in a ball and cried when urged to take part in boisterous games, and pleaded to go home to his mother. He wasn’t allowed to leave, of course. Willow’s a mere child, and this programme is about the all-important adults.”
Christopher Stevens, Daily Mail