“This wasn’t a conventional travel documentary in any sense.” Read on for the verdict on last night’s TV. 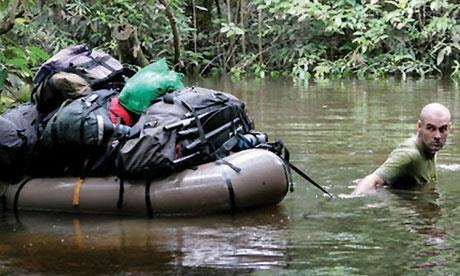 “This wasn’t a conventional travel documentary in any sense. Ed met few people and wasn’t much interested when he did; nor was he much taken by his surroundings. Dense vegetation and the urban sprawl of Manaus were greeted with equal detachment as obstacles to be overcome. But as a portrait of bloody-minded survival and endurance it was first rate.”
John Crace, The Guardian

“Perhaps if the man wasn’t a little bit daft he’d never have taken on such an incredible mission and we wouldn’t have witnessed one of the world’s greatest adventures unfolding on our screens.”
Matt Baylis, The Express

Dance! The Most Incredible Thing about Contemporary Dance, BBC4

“The conductor Charles Hazlewood has been given the unenviable task of discovering said phenomenon; he seemed rather most disposed to enjoy it than I was.”Alice-Azania Jarvis, The Independent

Planet of the Apemen: Battle for Earth, BBC1

“The big-boned, super-strong Neanderthals died out because they swallowed up too many scarce resources. The same might be said for actors in the documentary programmes. The sooner they become extinct the better.”
Matt Baylis, The Express

“It uses dramatisations to illustrate the progress of Homo sapiens, it was silly as last week, but gets a star back because the experts sound surer of their claims.”Andrew BIllen, The Times

“The idea was to find a polar bear (or several) on whom to do their usual cut-and-delve. The thing is, they can’t just go to a zoo because, this time, they’re looking at something more than just anatomy.”
Alice-Azania Jarvis, The Independent

“With its ingredients of ritual sacrifice and scalping, the investigation into the 2,500-year-old skeletons found at the bottom of Windy Pits caves in Yorkshire should have been more gripping than it was, but somehow the barbarism of the Iron Age just isn’t as shocking as 21st-century mayhem.”
John Crace, The Guardian

The Choir That Rocks, ITV1

“TV is really about storytelling, and, despite camera crews being sent off all over the country, it failed to find any really compelling human narratives among the 8,000, beyond, last night, the female soloist with a heart condition and a widower who had got his mojo back.”
Andrew Billen, The Times