“For all its pantomime elements, this show is the real deal.” Read on for the verdict on last night’s TV. 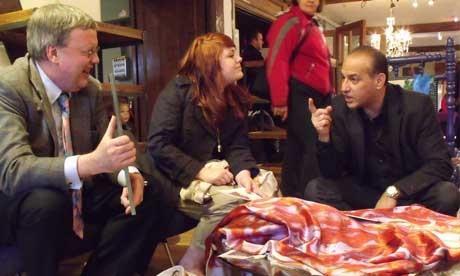 “The series boasts that it will record the highs and lows of “bringing a product to market”. It began, however, as an audition round of The X Factor for manufacturers.”Andrew Billen, The Times

“Last night’s episode began with Liberty in London and provided several “love- at-first-sight” moments, as buyers fell for novel accessories and high-end bits of bric-à-brac. If you can’t afford real shopping, it does very well as a fantasy substitute.”
Tom Sutcliffe, The Independent

“I suspect that if these episodes keep, as here, the presence of Paphitis (who has all the irritating earnestness of Tony Robinson as a presenter without the residual fondness for Baldrick to offset it) to a minimum and let Burstell off the leash, the weeks to come might be a notch above the standard reality show minimum entertainment level and may even edge into Not Quite As Bad as It Could or Should Have Been territory.”
Lucy Mangan, The Guardian

“For all its pantomime elements, this show is the real deal, showing us constantly that good ideas don’t always make it and even the great ones can fall at the fence”.
Matt Baylis, The Express

“Although Healey seemed determined to use her documentary to expunge her totally unnecessary guilt for this setback, it was an insight into how mixed-up we are on the subject.”
Andrew Billen, The Times

“After unsensationalist but decidedly brief looks at the decisions of other mothers – from teenage Jessica, who in common with most of her friends bottlefeeds because “boobs are for sex and for showing off”, to “earth mother” Carol, who still breastfeeds five-and-a-half-year-old Joel – her [Cherry’s] demons are finally laid to rest.”
Lucy Mangan, The Guardian

“We all understand how a Mills & Boon documentary is supposed to go. On the one hand, you have the consumers – all mundane discontent and hopeless dreams – and on the other you have the synthetic tribulation and bliss of the books, cruelly exposing what’s missing from their readers’ lives.

“Moggan’s achievement was to give her film real emotional depth, without entirely depriving you of the pleasures of the mismatch between dream and reality.”
Tom Sutcliffe, The Independent

“The humour is from another galaxy, frankly. It’s fresh and wild, so surreal it makes Salvador Dali look like a house painter. It’s also, unfortunately, the kind that works best in small doses.”
Matt Baylis, The Express