“One of the best yet aired.” Read on for the verdict on last night’s TV. 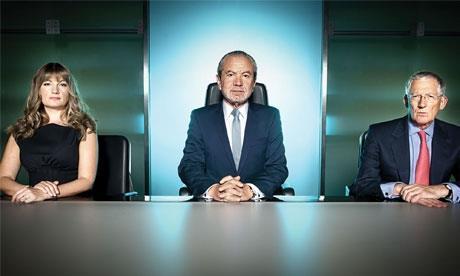 “An embarrassing gender divide is opening up on  the Apprentice: Thugs v Bitches. With the boys just about turning testosterone into a round-winning formula, it was the turn of the girls to disgrace themselves.  As the useless Melissa would say, this show continues to give the customer consumer happiness.”
Andrew Billen, The Times

“A very different set of apprentices were paraded in front of Lord Sugar for this, the second episode of series six and unquestionably one of the best yet aired.”
Amol Tajan, The Independent

“If those who proselytise on behalf of the Big Society have the slightest bit of common sense, they will ring up the BBC this morning, order several thousand copies of last night’s Wonderland, and post them to every sceptic of plans for the regeneration of civil society with whom they are familiar.”
Amol Rajan, The Independent

“You might make all sorts of assumptions about the sorts of boys who’d join a cheerleading team, especially if it was the country’s only boys’ cheerleading team but this clever, compassionate film blasted many of them to bits.”
Matt Baylis, The Daily Express

“For all the boys’ exuberance – and their third place gained at the UK championships – it was a melancholy tale. You could see the hope – not of further dancing success, but of more distant, unarticulated dreams. If there’s anything more guileless than a prepubescent boy in front of the camera, I really don’t want to see it. It’s beautiful and it tends to break your heart.”
Lucy Mangan, The Guardian

Explosions: How We shook the World, BBC4

”Explosions: How we shook the Worldsent engineer Jem Stansfield to a range of remote quarries and underground labs to reveal the science of gunpowder, dynamite and  nitroglycerine and no matter how many bangs the poor bloke sat through he still jumped like a scalded cat every time.”Matt Baylis, The Daily Express

“Much of the charm of Explosions: How we shook the World was wed to Stanfield playing the role of apprentice himself. Clearly super bright, he submitted himself to the wisdom of an assortment of geeks to explain the role of explosives in shaping human history.”
Amol Rajan, The Daily Express