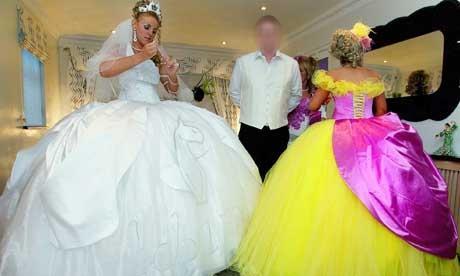 “The propositions and questions were not pursused. We got, instead, a standard-issue episode of a series far too easily satisfied with showing rather than telling.”
Andrew Billen, The Times

“I don’t think the people who are featured are being misrepresented. Or that any of them – the families of Nangirl and Margaret, Dolores, her sister, any of the others – would be unhappy about how they are portrayed. Why would they? They come out of it as they come out of their carriages, their limos and even their churches – fabulously.”
Sam Wollaston, The Guardian

Junior Doctors: Your Life in Their Hands, BBC3

“Last night’s bunch all working at London’s Chelsea and Westminster Hospital, were first class on the job, just rather terrifying off duty.”
Matt Baylis, The Express

How to Grow a Planet, BBC2

“Kudos to Iain Stewart and production team for coming up with the most aggressively blokey way possible to convey the evolutionary advantage that toughened seeds confer on those plants that have them.”
Tom Sutcliffe, The Independent

“As far as I could see, the only reason for its existence was that yesterday was St Valentine’s Day, though it’s possible that this counted as an excuse, rather than a justification. Quick, someone may have thought, this is the one day of the year we might actually get away with broadcasting this.”
Tom Sutcliffe, The Independent

Confessions of a Nurse, More4

“Inspiring and moving, the only thing wrong with this documentary series is what it obviously considers the feather in its cap, the little voiced thoughts in the background. These told us nothing we couldn’t see or imagine for ourselves.”
Matt Baylis, The Express