“Perhaps, too many occasions when you feel as if a wreath is being laid in honour of the book.” Read on for the verdict on last night’s TV. 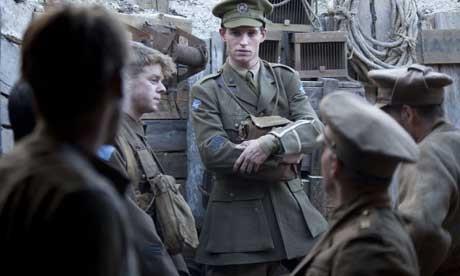 “There are times when it works beautifully (this is a production that looks stunning) but also, perhaps, too many occasions when you feel as if a wreath is being laid in honour of the book, rather than it being returned to you in renewed form.”
Tom Sutcliffe, The Independent

“It’s not fast: this is trench warfare, not a quick raid. But it gradually builds up to an intensity and power that takes hold of you. Both the war, and the love. This adaptation, which concludes next Sunday, has been an awful long time coming – there’s been talk of filming Birdsong since the novel was published almost 20 years ago. But I think this is worth the wait.”
Sam Wollaston, The Guardian

“By turning the story from a sequential history into a narrative with two time schemes, Morgan made something intensely moreish. Just when you felt you could not bear another minute’s horror, particularly the heat of the tunnels beneath the front, the action changed to the shaded, pastoral warmth of the romance between Stephen and Isabelle Azaire.”
Andrew Billen, The Times

“In the final stages we were chopping so swiftly between love and war that it felt as though we were watching a series advertisements instead of a drama. This sense was exaggerated by the extraordinary good looks of the main man and the amount of lingering camera shots that surrounded him in every scene.”
Matt Baylis, The Express

“It is an amiable affair in which three friends have set out to travel from Devon to Land’s End in a converted milk float, living only by barter and foraging, and using only sustainable electricity to top up their battery. So far, they seem to be proving that it’s perfectly possible, as long as you have the help of a team of researchers and the considerable inducement of an attendant television camera.”
Tom Sutcliffe, The Independent

“Oliver is off in search of a fellow Scot, Dr Livingstone. Well, his story anyway. It’s a fascinating one, of a fascinating man. David Livingstone wasn’t simply a blundering colonialist missionary with a bible in his hand and a pith helmet on his head; he was a reformer and a passionate anti-slavery campaigner.”
Sam Wollaston, The Guardian

“Miranda Hart is posher, gawkier and possibly more loveable than any other part I’ve seen her in. No matter how well she acts, though, she turns this social issues drama into pure sitcom.”
Matt Baylis, The Express