“Its biggest joke is the dad.” Read on for the verdict on the weekend’s TV. 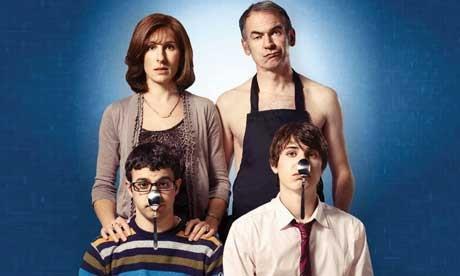 “Its biggest joke is the dad, played with such attention to detail by Paul Ritter that he conceals just how pedestrian his comedy traits are: Martin prefers to wear his shirt off than on; he is hard of hearing and specialises in non-sequitors, misunderstandings and repetitions; he delights in telling old jokes. Martin would be a great clown, but only were he your dad.”
Andrew Billen, The Times

“Most of the leads are barking: not only Carne’s incarcerated wife but also shell-shocked Carne himself, quite possibly their excitable daughter, loin-tormented Councillor Huggins and the tragically failing teacher Miss Sigglesthwaite.”
Andrew Billen, The Times

“Joe seems a better bet than Robert, who raped his wife, sent her mad and locked her up in an asylum but, as this starkly feminist story is turning out, one man is never much better than another.”
Matt Baylis, Daily Express

Toughest Place To Be A Midwife, BBC1

“Everywhere Suzanne turned she saw evidence that, far from being more authentically connected to the processes of birth, the local midwives were still employing methods that would be regarded here as insensitive at best, dangerous at worst.”
Tom Sutcliffe, The Independent

“Folk medicine mostly didn’t work, they knew it and ‘natural’ births are a luxury for people who know they can be saved by drugs and technology if they really need them.”
Matt Baylis, Daily Express

“It’s like picking up the needle from the scratched LP (remember?) and moving it backwards instead of forwards, then listening to it get stuck at the scratch all over again.”
Sam Wollaston, Guardian

“Like a tricycle with one wheel missing, the producers had to lean wildly to one side to keep the thing upright at all, since Lincoln’s admirers in the programme (though realistic about his flaws) greatly outnumbered his detractors.”
Tom Sutcliffe, The Independent