“The threads ticked over like an engine, on the imaginative side of mechanically.” Read on for the verdict on last night’s TV. 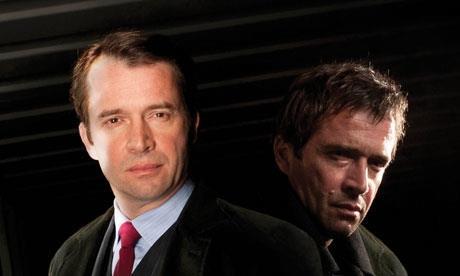 “Many of the devices we saw in Collision are used again, not least creative use of the flashback. The story began with Travers defending a young man accused of robbing a war veteran, and the evidence of a security guard, one of the prosecution’s key witnesses, was at first backed up by the flashback we saw of the defendant walking clearly into the light of a streetlamp.”
Brian Viner, The Independent

“Collision was all about plot and action. Injustice has action too – aforementioned close-range shooting of man in bed in head, with blood spattered all over the walls (so much, and so red, would it really be that colour after a week?). There’s some tense courtroom drama too. But it’s also about the characters, who are less numerous and more interesting.”
Sam Wollaston, The Guardian

“Intriguing stuff but you can’t help feeling that the greatest injustice may be the scheduling. Whether any drama is worth the sacrifice of spending five consecutive warm June evenings indoors is something to consider.”
Matt Baylis, The Express

“The threads ticked over like an engine, on the imaginative side of mechanically – until a total ramp-up in the very last minute of the hour. The cliff hanger showed Travers shooting the bearded man days earlier and demanded that we return for more.”
Alex Hardy, The Times

“It was a coup for Dan Edge, who made it, to land an interview with Petraeus, yet rather more of a coup to bag an interview with a regional Taliban commander, who made the predictable but nevertheless blood-chilling forecast that as many militants as the US and its allies kill, so the dead will in turn be avenged by their children.”
Brian Viner, The Independent

“We met a man called Glenn, who had what looked like a giant scrotum growing out of his belly, and hanging down to his feet. And I’m afraid I couldn’t watch any more. It didn’t feel right, or fair – to me, or to Glenn.”
Sam Wollaston, The Guardian

“The first two cases on it involved women who’d lost dramatic amounts of weight. Rather than this being the cause for celebration the rapid shrinking of their fat cells had left them with remarkable aprons of unwanted flesh which the programme’s resident doctors were sizing up with a view to removal.”
Matt Baylis, The Express