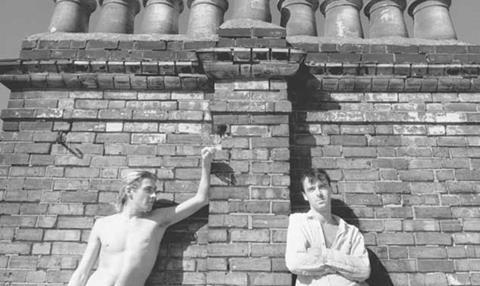 In piecing together 100 years of archive about gay and lesbian lives for her film Queerama, film-maker Daisy Asquith spent ten weeks in the BFI Archive, digging out funny, tragic and often shocking drama and documentary footage.

It’s a far cry from the last time she was burrowing away in the archive, researching bikes for her 2014 film Velorama.

“That feels rather innocent and sweet now,” she reflects. “It was a walk in the park, but this is a rollercoaster.”

This story was, she says, “a huge responsibility” and she is thankful to the BFI for allowing her to be political in her treatment.

“You want to represent all the amazing people in the queer community and you know you can’t get everything,” she says.

“I’m really proud, because I feel it’s so important that we address what society has put gay people through for centuries. It wasn’t like this in the 19th century. The 20th century has been hard on people; both Churchill and Thatcher came down very hard. It wasn’t over in 1967 and it wasn’t as bad in 1884.”

Different From The Others

Asquith’s starting point was the 1919 German film Different From The Others, thought to be the first mainstream cinematic representation of homosexuality, but she admits to slightly cheating the chronology by touching on Oscar Wilde’s arrest in 1895, which marked a shift away from the Victorian era’s “out of mind, out of sight” attitude.

While 2017 marks the 50th anniversary of the decriminalisation of homosexuality, Asquith doesn’t let it overshadow her film - as she points out, there was little gay sex on-screen until Derek Jarman’s films of the late 1970s and 1980s and the offence of gross indecency wasn’t lifted until 2003.

Nevertheless, she was shocked by some of the documentaries of the 1950s and 1960s.

“The language they use is mind-blowing – it’s all about being ‘sick and needing help’, being ‘disgusting’ or ‘revolting’, and these very courageous people talking about their sexuality are all filmed in silhouette.”

Asquith and her assistant director Mike Nicholls found it particularly tough to get the gender balance right. After all, gay men were arrested and prosecuted and some killed themselves; but it was never illegal to be a lesbian.

“It was a tug of war between me and Mike,” she admits. “We found some really shocking stories of lesbians of being lonely, rejected and shamed by society.”

A important inspiration for the film is the work of US singer John Grant, who will be performing after Queerama’s world premiere at Doc Fest.

“His lyrics are among the most funny, emotional and intelligent that I’ve ever heard,” she says. “He’s willing to say the things that others don’t.”

The pair struck up a friendship during the making of Greatest Mother Fucker, Asquith’s forthcoming film about the singer that is “more of a psychodrama than a documentary”. His songs bind Queerama together, along with contributions from Alison Goldfrapp.

“I worked with his lyrics, just pulling out themes,” she says. The film breaks into sections looking at rites of passage, growing up with shame, religious attitudes, coming out, falling in love and arrests and prosecutions.

“There’s pockets of footage, and it’s not evenly spaced over the century. I decided quite early on that it would be an emotional narrative rather than a historical one.”

BBC Storyville and the BFI jointly-funded Queerama, but using clips from many of the most famous films proved out of the reach of the budget. Asquith and Nicholls decided to use this to their advantage.

“We thought, ‘Well, everyone’s seen them anyway, so let’s focus on the stuff that’s more surprising’,” she says.

“It’s not just about the overtly queer texts in any case – we wanted to show how gay people had to reimagine storylines and characters as queer to find themselves on screen.”

Queerama promises to tell some uncomfortable truths, but Asquith found a dark humour in some of the ways homosexuality has been depicted.

“The funniest thing is the old documentaries, where you’ll have some hilarious uptight BBC English presenter asking ‘What do lesbians actually do?’. You realise that no-one cares about the law when it comes to love. Gay people have been in love throughout the centuries and they’ve been having sex too.”