Lupus Films and The Picture Production Company are using a new proprietary storyboarding and preproduction management system to help with production of The Hive, a new CG children’s show for GMTV. 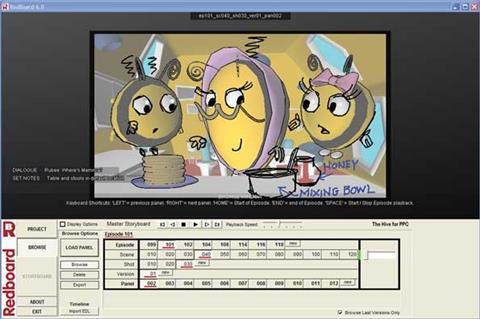 Redboard uses gaming technology to make it possible to preview storyboard panels in real-time, by providing a CG representation of the narrative environment. Storyboard artists can then add drawn details and expressions.

Its developer, Hibbert Ralph Animation (HRA), believes it makes storyboarding on this type of show more accurate. This, in turn, helps keep costs down by minimising expensive changes further down the production pipeline.

Series producer Camilla Deakin said: “It’s reassuring for a director to know that when they send their animation to the studio, it has the correct camera angles, elements sizes and positioning. They know they won’t have to be corrected later. 2D storyboards look nice but they often cheat perspectives and sizes to fit it all in.

“It’s also ideal for presenting to broadcasters as [the] storyboards build an accurate sense of what the final production will look like.”

The Hive follows the lives of brother and sister bees, Buzzbee and Rubee. It will be broadcast on GMTV
from autumn 2010.