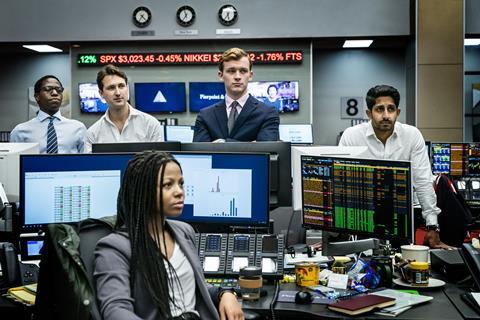 “The fanfare around this HBO/BBC co-production is wholly deserved. Industry is alternately mundane, thrilling, taut, messed up, real and shocking. It boasts some excellent writing. But its greatest strength is bringing all of its elements together in a moreish package where relationships are constantly in flux and the tension is ever-rising.”
Hannah J Davies, The Guardian

“Industry is the kind of thrillingly fresh series that only comes along once every few years, a drama that makes its rivals look tired and uninspired. It won’t be everyone’s bag. There’s a lot of sex and drugs and some of it verges on gratuitous. Underneath the spiky and unfamiliar exterior, though, is a beguilingly original series that ought to mark the launch of several major careers.”
Patrick Smith, The Independent

“It’s like This Life populated by candidates from The Apprentice and will, quite clearly, become as perniciously addictive as the drugs and stimulants that we saw casually guzzled in industrial quantities.”
James Jackson, The Times

“While Industry may lack the sardonic wit, endless swearing and lavish set pieces of Jesse Armstrong’s Succession, it offers the same deliciously watchable claustrophobia and anxiety.”
Emily Baker, The i

“Directed by Lena Dunham, this eight-part serial is The Apprentice played for lethally high stakes. Like the reality show, it’s fast-paced but tacky, even seedy.”
Christopher Stevens, Daily Mail

“What the writers have captured so well is the feel of embarking on a daunting career at the beginning of your 20s, that first job in a competitive industry and a big city. But the drama is lifeless and has less visual appeal than an episode of The Apprentice. There is promise here, though, if we can be persuaded – no pun intended – to invest in the characters.”
Anita Singh, The Telegraph