“It makes for a zippy half-hour and I happily cackled away for much of it.” 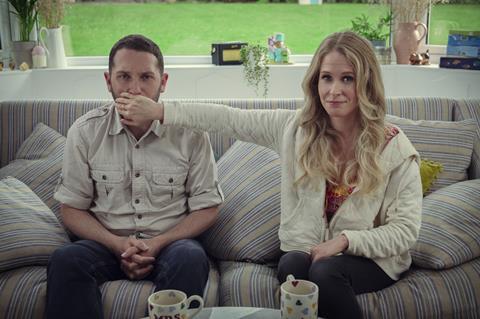 “It is an insight into their marriage in the same way that HBO/Sky One’s The Flight Attendant is a training manual for air stewards, which is to say that it is heightened, exaggerated and plays to the crowd. It makes for a zippy half-hour and – although it feels strange to say it is pleasurable, given the bickering – I happily cackled away for much of it.”
Rebecca Nicholson, The Guardian

“Lucy, who co-writes the show with Tim Reid, has a great sense for the rhythm of a marital argument. Jon is naturally funny, part of the tradition of hangdog English comics that goes back to Tony Hancock. But they grew up in the school of comedy that believes all you have to do to get a laugh is reel off a stream of profanities for a punchline. Every laugh is undermined, because the couple can always take the easy route by saying something dirty”
Christopher Stevens, Daily Mail

“Lots of people love this show – the first series was Dave’s highest-rated launch in five years, drawing more than a million viewers per episode. So it’s probably good, and they’re probably funny. But they are performers about whom I know absolutely nothing, stuck as I am in my comedy rut, and becoming acquainted with them for the first time here, the beginning of series two, left me feeling as if everyone was in on the joke but me.”
Anita Singh, The Telegraph

“This was barking mad, packing more corn than the Jolly Green Giant. But the maddest thing of all? In a perverse way I quite enjoyed it.”
Carol Midgley, The Times

“Pandemic 2020 elegantly destroyed the glib claim that with Covid-19 ‘we are all in this together’. Without any narration the programme showed why it is indeed nonsense, contrasting poorer large families cooped up in tiny flats with the wealthy who high-tailed it to their second homes in the country to ‘sit it out in nature’.”
Carol Midgley, The Times

“Perhaps future generations will uncover some dynamite news about the Queen that will upend everything we know. Until then, films like this will tell us nothing new. Really, these documentaries – and there seem to be an awful lot of them around at the moment – should stop trying to claim that they are revealing great secrets and just allow us to enjoy them for what they are: charming footage of the Royal family from years gone by, and a gentle reminder that the Queen has been doing a marvellous job for nigh on 70 years.”
Anita Singh, The Telegraph