TV Critics: 24 Hours In The Past; Empire; The Queen’s Big Night Out

“There is something satisfying about seeing (vaguely) familiar faces off the telly wading around in excrement.” 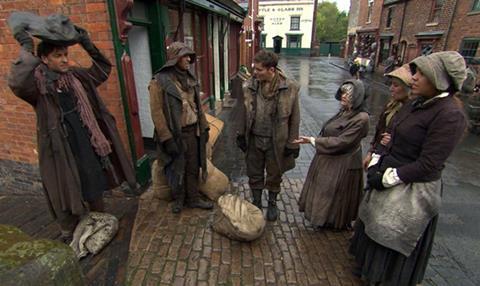 “There have been more valid live-like-then television experiments. But there is something satisfying about seeing (vaguely) familiar faces off the telly wading around in excrement.”
Sam Wollaston, The Guardian

“As entertainment, 24 Hours in the Past had its moments. As living history though, it was in parts a little lacking in context and for a primetime TV show there was just too much emphasis on ordure.”
Gerard O’Donovan, The Telegraph

“The show worked well, because all six were eager for the experience. If these had been work-shy airheads, the kind of instant celebs bred by reality shows, they would have been begging to leave within minutes, and we would have learned nothing.”
Christopher Stevens, Daily Mail

“What a dismal, joyless effort 24 Hours in the Past was. There are three more of these. We must hope the housemates start turning on one another entertainingly. As history, it’s bunk.”
Andrew Billen, The Times

“The correct term for this kind of show, in which a bunch of celebrities try to survive in some artificially recreated version of the past, is living history. The better term, I think, is celebrity barrel scrape.”
Matt Baylis, Daily Express

“Handling human waste in dreary surroundings isn’t fun to do and, unsurprisingly, it isn’t much fun to watch either. Still, this immersive approach did uncover interesting detail that other history programmes have missed.”
Ellen E Jones, The Independent

“This is a show that could well become a cult hit here in Blighty and there’s no doubt that Cookie’s acerbic turns of phrase and frankly humungous earrings will prove popular. Shakespeare it ain’t (sorry, guys) but if you like your flavours bold, Empire might just hit the spot.”
Chris Bennion, The Independent

“With catchy musical interludes and the introduction of noteworthy themes including homophobia and mental health, the first episode simmered with potential and made the rest of the series an enticing prospect.”
Nicole Vassell, The Telegraph

“Empire is hot, but is it cool? The leads look as great as some of them sound. The dialogue is fun. The plot, however, is melodramatic hokum.”
Andrew Billen, The Times

The Queen’s Big Night Out, C4

“The programme’s prime sources were Margaret Rhodes, the Queen’s cousin and Baroness Trumpington, both of whom were there, both of whom recalled the night with a twinkle and a certain amount of detail but not the most exciting detail.”
Matt Baylis, Daily Express

“The recollections of her friends 70 years on were joyous, and the archive footage was amazing.”
Christopher Stevens, Daily Mail