TV Critics: Crazy About One Direction; Paul O'Grady's Working Britain; The Men Who Made Us Thin

“A documentary as exhausting as it was startling, compelling and assaulting to the ears.” Read on for the verdict on last night’s TV. 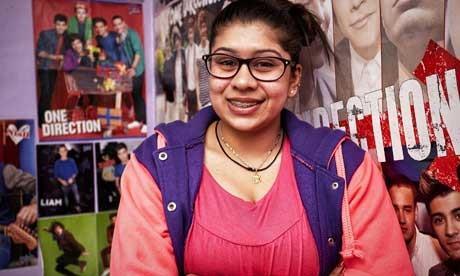 Crazy About One Direction, C4

“It’s a lovely film – not unamused, often surprised, but sensitive and gentle too – about an extraordinary phenomenon. You know what it reminds me of? Stan, that brilliant song by Eminem, about an obsessed fan.”
Sam Wollaston, The Guardian

“A dozen ad breaks could not provide enough respite from Crazy About One Direction, a documentary as exhausting as it was startling, compelling and assaulting to the ears… Two things I wondered: what their parents made of all this. And, more importantly, are 1D and their overlord, Simon Cowell, fully aware of the twisted hold they have on these girls? It can’t be healthy for anyone.”
Simon Usborne, The Independent

“As we watched girls queuing in concert halls, car parks and hotel lobbies, it was hard to agree with the premise that this was a ‘new breed of fan’. Fifty years ago, Beatlemania also required security barriers and police officers to guard a band against thousands of teenagers wielding placards that threatened marriage. Then, at least, documentary-makers realised their more interesting subject was in front of the barriers.”
Tom Rowley, The Telegraph

“The show was supposed to terrify us with the faux intimacy allowed star and fan through social networks… However, the crazies seemed the most harmless fans ever, chastely fantasising about snogging their idols, hunting in packs of touching female solidarity and, at the concerts, keeping their knickers on at all times.”
Andrew Billen, The Times

“It veered from the confused to the occasionally illuminating. In summary: Paul O’Grady still identifies himself as working class, but a new generation doesn’t because of things like wars, technology and Thatcher. The personal stuff, like O’Grady himself, was entertaining but would have benefited from the historical rigour and insight of Who Do You Think You Are?.”
Simon Usborne, The Independent

“The comedian proved a good choice to front this two-parter examining the history of the working class. True, there were plenty of crude gags and excuses for the former drag queen Lily Savage to don a variety of disguises from butler to miner. But O’Grady’s personal history also provided a focus for his wider narrative… Too often, though, his prejudices got in the way of honest history.”
Tom Rowley, The Telegraph

“O’Grady’s programme was stuffed with all the humour and warmth you’d expect… His genuine respect for working people shone through and you couldn’t help sharing in his lament for what had vanished… For this critic, though, it was a bit rich praising the working classes at the same time as telling us how his mum had been forbidden from going to grammar school and sent to work as a maid.”
Matt Baylis, Daily Express

“Jacques Peretti’s The Men who Made Us Thin is more social history than science, but then there is nothing very scientific about the slimming industry. Last night he wagged his finger at fitness clubs whose crime had been to pretend they helped you lose weight rather than stay healthy… The more deserving object of his ire was the pharmaceutical industry, which for decades has been inventing pills that do not work well or cause nasty side-effects.”
Andrew Billen, The Times