TV Critics: Youngers; Iraq: Did My Son Die in Vain; We're Having a Baby; A Very British Wedding

“Get on board with the lingo and it’s an amusing enough ride, albeit one to nowhere in particular.” Read on for the verdict on last night’s TV. 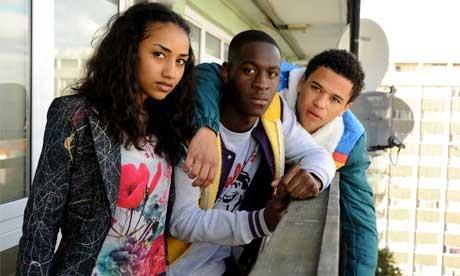 “What you make of it all will depend pretty heavily on your attitude to the show’s distinctly “authentic” dialogue, full of bluds, bruvs, mandems and other words and phrases that will have the less down-with-it viewer googling frantically to keep up. Get on board with the lingo and it’s an amusing enough ride, albeit one to nowhere in particular. But then that’s being young in a nutshell, really, isn’t it?”
Tom Meltzer, The Guardian

“E4’s new series, set on a tough south London estate, is like Ill Manors on a very good tranquilizer, a guileless account of two friends – Yemi and Jay – who illustrate the rival prospects of inner-city boys with an informational-poster simplicity… They say things like ‘Wa g’wan mandem?’ and ‘You get me blud?’ a lot, but really it’s just a teen romance with a different set of accents, and far more innocent than Hollyoaks in its dilemmas and narrative cruxes.”
Tom Sutcliffe, The Independent

“I really hope that Youngers, set in a poor South London estate, bangs home the message that Yemi, who in last night’s opening episode got straight As, is a vastly superior role model to his E and F-earning friend Jay, who chumpishly seeks fame through rap music competition… It is a bit dodgily acted, but not so dogily you do not care what happens next.”
Andrew Billen, The Times

“Documentaries like this can feel in a sense unreviewable. A family’s grief; the aftermath of war. The reviewer’s little bag of adjectives (‘moving’, ‘thought-provoking’) hardly seem equal to the job of evaluating such huge and horrible subject matter. I wouldn’t presume to answer the question in the programme’s title. All I can say is that I’m glad it was made. I just wish it hadn’t had to be.”
Michael Deacon, The Telegraph

“It was hard to believe that the film-makers were ever really in doubt about the answer they’d get. Geoff [Dunsmore] might have gone with as open a mind as his loss allowed, but everyone else involved was surely expecting the answer ‘Yes’. The temptation was to leap to a verdict yourself when you saw Geoff driving into Basra from the airport, wearing a flak kacket and flanked by a driver with a machine gun. It didn’t exactly look like a liberated land, simply one that had swapped centralised state terror for a more informal strife.”
Tom Sutcliffe, The Independent

“Personal journeys are meant, in television terms, to provide redemption but Dunsmore was not selfishly in Iraq to seek closure. Like the This World strand to which this powerful documentary belonged, Dunsmore chose instead to report what he saw.”
Andrew Billen, The Times

We’re Having a Baby, BBC3

“The show is refreshingly warts-and-all. It baulks at the graphic detail of the more baby-centric One Born Every Minute, but delves far deeper into the tempestuous emotions of the expectant mothers… At an hour and a half, the film inevitably meanders at times, but it is worth sticking around for the last half hour when the babies start popping out left, right and centre, if only to point at the screen, coo inwardly and bask in the infectious innocence of a miniature army of newborns.”
Tom Meltzer, The Guardian

“Has ever a programme borne a more misleading title than A Very British Wedding? Yes, I know it’s deliberate but the two that featured last night were about as far as they could be from a church ceremony and wedding breakfast in the village hall.”
Virginia Blackburn, Daily Express