“More than enough to reassure everyone that the magic remains intact” 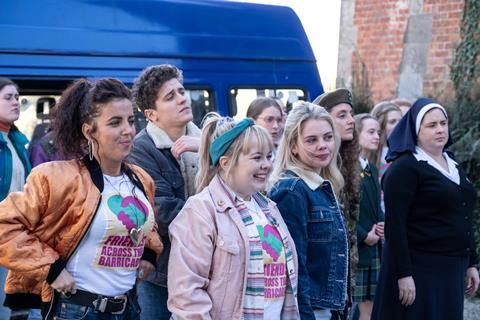 “It was more than enough to reassure everyone that the Derry Girls’ magic remains intact. The evocation of the 90s is as lightly done as ever and the Troubled setting never overwhelms but simply throws into relief the ordinariness of the girls’ lives in the middle of extraordinary depths of conflict.”
Lucy Mangan, The Guardian

“It was Derry Girls all over: nostalgia so fun and brash, but instinctively truthful that even the most sensitive offence-taker couldn’t fault it.”
James Jackson, The Times

“Lisa McGee’s Troubles sitcom slalomed back for another uproarious sideways glance at life in the dog days of the Northern Ireland conflict. Jokes arrived at a breathless rat-tat-tat that would be exhausting if the hit-to-miss ratio wasn’t so high.”
Ed Power, The Telegraph

“It’s all very warm and cosy, yet it feels mild-mannered to a fault. I came away from Home thinking it needed to be more of something. More bold, more brave, or possibly more stupid. It has its moments. But it feels slight, and nice, and ever so presentable.”
Rebecca Nicholson, The Guardian

“By the end of a brief half-hour, Home was promoting a sense of think-of-your-fellow-man empathy more affably than a dozen Guardian editorials would. But overall it’s more maudlin than lols.”
James Jackson, The Times

“There was a warm heart here, and the opening episode suggests there could be plenty more amusing, odd-couple gags to come. If Home manages to sufficiently dodge the trap of being patronising, it may shape into a lovely thing indeed.”
Catherine Gee, The Telegraph