Quiz; Joe Lycett’s Got Your Back; Red Dwarf; After Life

“The most entertaining thing ITV has done in ages, and fair play to them for greenlighting a show which makes ITV executives seem awful” 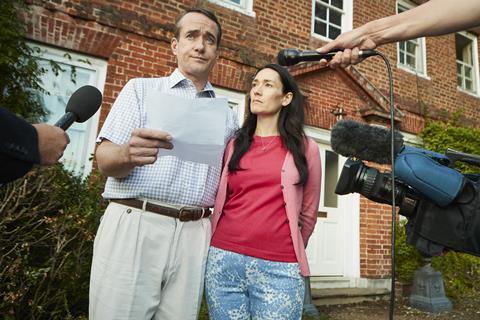 “Quiz is a belter. It takes a story you think you know, fills it with you’ve-got-to-be-kidding moments, gives it pathos and laughs. It’s the most entertaining thing ITV has done in ages, and fair play to them for green lighting a show which makes ITV executives seem awful. The performances across the board were so good that Sheen’s impersonation of Tarrant was only a small part of the whole.”
Anita Singh, The Telegraph

“James Graham’s three-parter, which started last night, was cleverly crafted with an upbeat energy and a sense of mischief. If Michael Sheen’s splendid impression of Chris Tarrant did not impress then, please, watch it again. In the first episode we were in the least interesting bit of the “coughing major” story. This is when good casting pays off because the actors made inconsequential scenes entertaining.”
Carol Midgley, The Times

“The opening episode gets off to a shaky start, credibility and credulity-wise, as we watch how the show that would soon dominate the schedules came together. The earnestness with which this is all treated may reflect accurately what goes into the genesis of a show, but to see it played straight is deeply off-putting. Fortunately, once the nuts and bolts are dealt with and the focus shifts to the Ingrams and life among normal humans outside the TV studios, the drama becomes as addictive as Who Wants to Be a Millionaire? proved.”
Lucy Mangan, The Guardian

“Graham is in his element having so much material to fashion into three hours – courtroom drama, crime caper, historical document and celebrity biography are all here. The opener was funny, gripping and informative. But while I greatly admire Graham’s work, which includes Brexit: The Uncivil War (about the EU referendum), in his efforts to be even-handed he sometimes lets some truly dreadful people off the hook, and there’s an element of that here.”
Veronica Lee, The i

“The TV version bears many hallmarks of a script that was originally written for live performance — such as the way Nicholas Woodeson as the prosecuting barrister addresses his remarks directly to the camera, making us feel that we, the viewers, are the jury. Matthew Macfayden, as Charles Ingram, conveys a pathetic charm. The actor has a gift for making weak, ineffectual men seem lovable. Fleabag’s Sian Clifford is excellent too, as the brittle wife frustrated by the stupidity of all the men around her.”
Christopher Stevens, Daily Mail

Joe Lycett’s Got Your Back, Channel 4

“Its magazine-y format allows it to bob back and forth between serious and trivial cases, a spot of audience interaction and a sense of warmth emanating from the host. Comedian Lycett has a fairly retro vibe, with a soft campness, a genuine but never scathing wit and a willingness to engage seriously with his subject when required, primarily during the larger-scale set piece around which each episode is structured.”
Lucy Mangan, The Guardian

“It might sound a little dull, but the comedian’s spunky attitude and willingness to go off-script brings what could be “Watchdog with jokes” to life. The gall of Lycett and his guests, this time panel show darling Katherine Ryan, makes this worth a second series. With an appearance from former Bake Off contestant Val and constant references to Twitter, it’s clear Joe Lycett’s Got Your Back was birthed from an internet culture where the aim of the game is to garner as many likes and retweets as possible.”
Emily Baker, The i

“As a concept, Red Dwarf has enough about it to work over 90 minutes. It is a big enough world, built on solid enough foundations, to sustain our attention for a longer period of time than a single short episode. It is packed with little in-jokes and nods to the past that will please dedicated fans, and is broad enough to be perfectly watchable. I’m not sure, though, that this particular story was the one to try stretching it out with. The best Red Dwarf episodes had clever conceits. This touches on pastiche by briefly transforming Rimmer into a superhero. The Promised Land is not Red Dwarf in its prime, but it is a decent enough way to pass the time.”
Rebecca Nicholson, The Guardian

“When it debuted last year this tale of a man grumpily refusing to come to terms with his wife’s death received mixed reviews but won over plenty of viewers. Unfortunately, the second series, which arrives on Netflix on 24 April, hits too many of the same beats. It feels less like a continuation than a pointless raking over of the dark-comedy coals.”
Ed Power, The Telegraph