The Pursuit of Love; Fargo; Gods of Snooker; Blinded: Those Who Kill 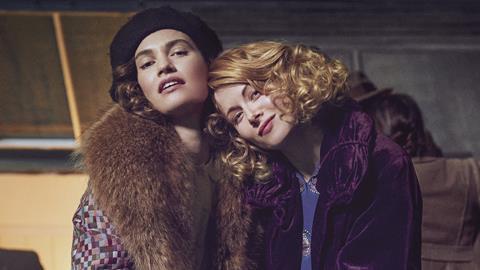 “Emily Mortimer’s adaptation of Nancy Mitford’s 1945 novel is dynamic, vigorous and punky, while remaining mostly true to Mitford’s dark jocularity and suggestion that the upper classes are half mad. It is at times a bit too pleased with itself, like a handsome cad preening in the mirror and liking what he sees. But it has stonking performances from Dominic West, Lily James and Andrew Scott, an actor I could watch putting out a wheelie bin.”
Carol Midgley, The Times

“It is surely destined (as any translation of a classic book to screen is) to be frowned on by purist fans. But for those of us outside that select group it is an absolutely glorious hour.”
Lucy Mangan, The Guardian

“It is enjoyable, and the first episode is quite the best. But its leading lady is all wrong, despite looking the part. Linda should be exasperating, but in this adaptation she is simply annoying.”
Anita Singh, The Telegraph

“The starry cast looked like they were having the time of their lives. Indeed, the best thing about the show was its intimate, truthful portrayal of teenage friendship, and how it can feel as intense as romance. Some of the script was a little clunky and there were signs that the characters had been given an unnecessary feminist makeover. But when something is such extraordinarily good fun, it feels churlish to nitpick too much.”
Gwendolyn Smith, The i

“Superficially, all was as it should be. But for the first time, returns are diminishing and Noah Hawley’s seemingly bottomless well of invention is running dry. Despite Jessie Buckley’s livewire presence, it plodded in places, getting bogged down in detail, context, derivative gangster tropes and a very crowded roster of characters.”
Gabriel Tate, The Telegraph

“There’s a powerful cast and it’s visually sumptuous, packed with immaculate props and costumes. But with U.S. society so fragmented, it’s hard to understand how anyone thought the time was right for this black comedy.”
Christopher Stevens, Daily Mail

“Jessie Buckley was brilliantly subtle and unpredictable as an eccentric, murderous nurse, while Ben Whishaw gave an understated, slippery performance as an inscrutable Irish transplant to the Italian gang. In general though, the opening was weighed down with scene setting and favoured style over substance.”
Gwendolyn Smith, The i

“There’s just too much going on here, and too little of it is interesting. Fargo has returned still smarter and slicker than the majority of crime dramas out there. But for those who’ve seen the series reinvent itself to great success twice already, this may feel like one do-over too many.”
Louis Chilton, The Independent

“Eighties Britain. Gods of Snooker did a superb job of evoking the era, gathering telling insights from virtually every key player still alive. Alex Higgins was such a dominant personality that most of his peers got scarcely a look-in. But so entertaining was the telling, driven by a soundtrack as leftfield as the Hurricane’s shot selection, that it wasn’t – with apologies to Mitchell and Webb’s snooker commentators – a bad miss.”
Gabriel Tate, The Telegraph

Blinded: Those Who Kill, BBC4

“Not every viewer sees the attraction of a gory Viking murder-fest, where all the scenes are shot in stark half-light and most of the characters are exhausted, grief-stricken or prostrated by depression from the start. But if you like your crime shows bleak and nasty — which I certainly do — this one is as harsh as home-brewed schnapps and as dark as February in Malmo.”
Christopher Stevens, Daily Mail