“While it works as a spooky drama, it’s underpowered as a comedy” 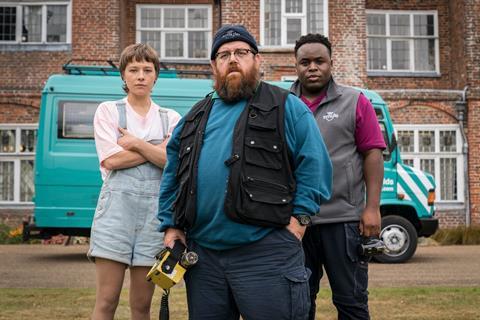 “The new paranormal comedy from Simon Pegg and Nick Frost is haunted by the ghosts of the great show it never quite becomes. Truth Seekers marks the reunion of the Shaun of the Dead/Spaced duo and at times leans heavily on their nerdish chemistry. Yet its stab at merging vintage horror (Arthur C Clarke’s Mysterious World was apparently an inspiration) with contemporary chuckles goes off half-cocked.”
Ed Power, Telegraph

“While it works as a spooky drama, Truth Seekers is underpowered as a comedy. The jokes, often couched in Frost’s trademark droll delivery, are barely there; more like an afterthought than the backbone of the series. Anyone expecting the nimble wit of the Cornetto trilogy – Shaun of the Dead, Hot Fuzz and The World’s End – might find this lacking; and, though it tries to pack out the story with warmth, it suffers from a lack of fun.”
Rebecca Nicholson, The Guardian

“This excellent documentary had intimate access not only to abortion clinics and the staff who cope with death threats every day (in 2009 George Tiller, the medical director of an abortion clinic that provided late termination of pregnancy, was shot dead in Wichita, Kansas), but the patients too.”
Carol Midgley, The Times

“Footage submitted by viewers has been the highlight so far of this two-week live TV special. We’ve seen outstanding amateur clips of bitterns stalking through reedbeds, pine martens visiting a campsite bird table to snaffle custard creams, a raven doing acrobatics like a Red Arrow, and —my favourite — a fox popping the foil tops off milk bottles on doorsteps to sip the cream.”
Christopher Stevens, Daily Mail

Earlier this week I called The Sister a car-crash drama — horrible to look at, but you couldn’t turn away. However, by the finale I was finding it very easy indeed to look away. In fact I was thinking: “Did I really spend four hours on this hokum?” Escapist hokum, granted, but nonsense all the same.
Carol Midgley, The Times