“Well-written, well-acted and kept me guessing.” Read on for the verdict on last night’s TV. 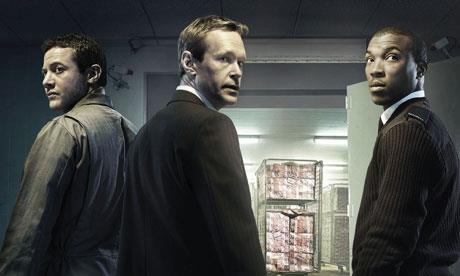 “It grew on me after last week’s unlikely start as its theme shifted from a rigged discussion about dishonesty towards a definition of manhood. Tony Basgallop’s writing is no subtler than it ought to be, so there were plenty of references to balls.”
Andrew Billen, The Times

“Basically the meek became the strong in this episode. Mainly because 150 million quid is one hell of an incentive.”
Matt Baylis, The Express

“Just another serviceable heist thriller, I reckoned; I was wrong. It was well-written, well-acted and kept me guessing. Last night was more of the same.”
John Crace, The Guardian

“It was strong on cute clips – the meerkats would have been disabling for anyone not wearing a full-body anthropomorphism-protection suit – but a bit short on hard thinking.”
Tom Sutcliffe, The Independent

Bullets, Boots and Bandages: How to Really Win at War, BBC4

“It is a perfect example of a BBC4 programme. It is defiantly unglamorous – being a history of military logistics – and pretty much untroubled by the idea of wasting any time or effort seducing the reluctant to watch.”
Tom Sutcliffe, The Independent

“It was well put together and sped from 1066 to the present day. Too quickly, perhaps, for I was left wondering if there weren’t other lessons we ought to be learning from history that were just as important.”
John Crace, The Guardian

“The finale ended up almost a remake of John Cleese’s Clockwise, with the lads racing to return the stolen euros to beneath the beach parasol of their rightful thief, Mackenzie.”
Andrew Billen, The Times

“Most of all, though, was the sense of a missed opportunity. Only on very few occasions did we get close to exploring the attraction of driving huge loads around the country week after week with only the radio for company. Lindsay had a two-year-old son who seemed to come with her from time to time, but no one else even hinted that they might share their lives with someone else.”
John Crace, The Guardian