“It is dark and funny and strikes so near the knuckle of masculinity that it hurts.” Read on for the verdict on last night’s TV. 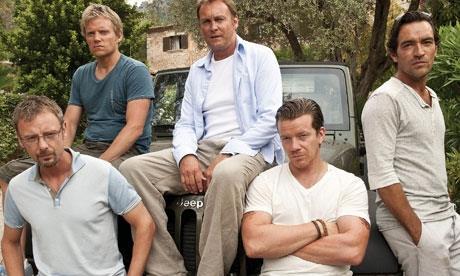 “Unlike Boardwalk, Mad Dogs is unpredictable. It may turn out to be the British Deliverance - or it may not. But it is dark and funny and strikes so near the knuckle of masculinity that it hurts.”
Andrew Billen, The Times

“You could count the influences: Lord of the Flies, Sexy Beast, Point Break, Shallow Grave and probably more to come in future episodes, but no matter how hard Mad Dogs tried to establish its edgy credentials, the lasting impression of the first episode was of a bunch of fortysomething actors having a good time abroad – lounging around the swimming pool, going out to bars and mucking around in a motor boat at somebody else’s expense.”
John Crace, The Guardian

How to Make It in America, Sky Atlantic

“Sky Atlantic, meanwhile, in the comedy How to Make It in America, has picked up from HBO what looks like a winner, albeit one about losers.”
Andrew Billen, The Times

“I’m not quite sure of the programme’s purpose– what with Britain’s Best Dish, Rick Stein’s Food Heroes et al – it’s hardly the first of its kind, but I did quite like it.”
Alice-Azania Jarvis, The Independent

“Things are genuinely creepy, occasionally quite frightening. Coupled with classy performances and a commendable absence of special effects, it’s really rather gripping.”
Alice-Azania Jarvis, The Independent

“At least the Bard knew a thing or two about pacing his stories. If only the same were true for Marchlands (ITV1), whose plot could be compared to a dripping tap.”
Matt Baylis, The Daily Express

“Julius Caesar: Rome Unwrapped successfully undid one of these connections last night with an altogether very watchable look at the great dictator’s life and times.”
Matt Baylis, The Daily Express

“Finally, a word of thanks for The Culture Show (BBC2), which continues to prove you can make thought-provoking television about the arts without dragging in a bunch of pretentious talking-heads as on the Friday night Review Show.”
John Crace, The Guardian