“The shuffling of human genes is a remarkable thing and never more so than in the case of mixed-race twins.” Read on for the verdict on last night’s TV. 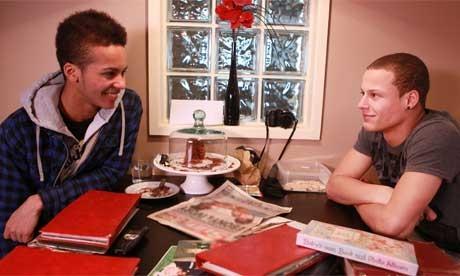 “The documentary was full of such moments – little clues to the fact that race (and mixed-race) is far more complicated than we might wish it to be. And it constantly confounded your expectations.”
Tom Sutcliffe, The Independent

“The shuffling of human genes is a remarkable thing and never more so than in the case of mixed-race twins. Rightly or wrongly, it sidestepped the maths and biology of the phenomenon to concentrate on what it feels like to grow up a different colour to your own flesh and blood.”
Matt Baylis, The Express

This is Jinsy, Sky Atlantic

“There’s a fine running gag about a talent show judged by a dog called Sandy (his paw hovers between two buttons marked “Woof” and “Enoof” after he’s watched the acts). I couldn’t put it better than one of the characters in last night’s episode: “I think I can safely say, without fear of exaggeration, that I quite enjoyed it.”
Tom Sutcliffe, The Independent

Celebrity Come Dine With Me, Channel 4

“Dave Lamb, whose voiceover is such deliciously arsenic-laced ambrosia, was spot-on to call out Pete Burns for looking like a Cher tribute act.”
Alex Hardy, The Times

“As the contestants pooled their way around Monaco, nobody could remember what to call Lembit Opik. Was his name Armpit, perhaps or Limpet? The latter actually fits quite well: we’ve seen less clingy-on desperation from some limpets.”
Alex Hardy, The Times

“The lack of business nous was frightening when you consider the owners both once worked in the City.”
Matt Baylis, The Express