“Creaking, lame, unfunny, arcane and stuffed with cardboard characters.” Read on for the verdict on last night’s TV. 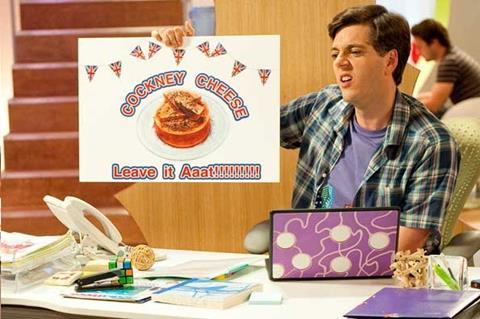 “It’s done as a classic sitcom, and it shouldn’t be. The laughter track and stilted delivery, comedy accents and clownish acting don’t sit well with what is, essentially, an excellent idea for a satire.”
Matt Baylis, Daily Express

“Some of the characters need more time to bed down into the character predictability that is one element of a successful sitcom. But there’s enough going on here to persuade viewers that it might be worth sticking around.”
Tom Sutcliffe, The Independent

“Brian Duffy’s story was vividly studded with the colour, spark and eccentricity of swinging London.”
Tim Teeman, The Times

“Brian Duffy didn’t much want to go into details of his inner life beyond saying that he stopped taking photographs because he was bored. You’d have thought his interviewers would have wanted to go a little deeper than this.”
Matt Baylis, Daily Express

“It wasn’t a great film: he came across as a difficult and reluctant subject, not very cooperative.”
Sam Wollaston, The Guardian

“Last night’s tumble of revelations and histrionics hit one dud note after another. The storyline has committed the cardinal sin of not going anywhere.”
Tim Teeman, The Times

HORIZON: WHY DO VIRUSES KILL? BBC2

“They posed an intriguing and timely question, but, after 50 minutes, the enigmas with which the programme began were largely undisturbed.”
Tom Sutcliffe, The Independent

“It features torment and corned-beef gloop. I’m really enjoying it - though I’m not sure how proud it makes you of our species.”
Sam Wollaston, The Guardian