“Let’s club together and send Oliver round the world.” Read on for the verdict on last night’s TV. 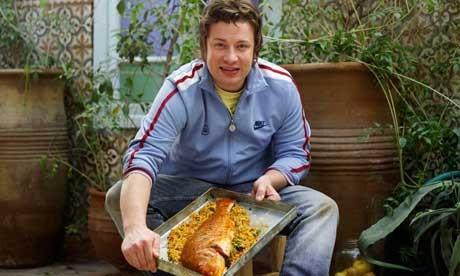 “Travel tucker is clearly the right genre for this telly chef so let’s club together and send Oliver round the world.”
Matt Baylis, Daily Express

“He’s still got those magic ingredients – enthusiasm mixed with unpredictability (the director, you sense, never quite know what Oliver is going to do or say next) – to make tasty television.”
Alice Jones, The Independent

“The locals actually seem to quite like him. Well, they aren’t bored by him yet. They even begin to borrow some of his language, and start talking like him. Oh, my word, the whole of Marrakech, literally most of it, is soon going to be talking English like Jamie Oliver.”
Sam Wollaston, The Guardian

“His ego in check for once, he even kept in the bit where the market traders started chanting “Gordon Ramsey! Delia Smith!” at him.”
Andrew Billen, The Times

THE MAN WHO INJECTS VENOM, FIVE

“With his lanky hair and black t-shirts Ludwin seemed like a kindred spirit to those youngsters who hand around graveyards and toy with the idea of drinking blood. So what if he was advancing science, he was still very silly.”
Matt Baylis, Daily Express

“Last night’s follow-up was one of those tiresome future-set episodes that asked, “What if?” Instead, I found myself asking “Who cares?” Shame.”
Alice Jones, The Independent