“Absentee fathers are a genuine social issue and well worth investigation, but Daddy Daycare managed to avoid anything of any depth.” Read on for the verdict on last night’s TV. 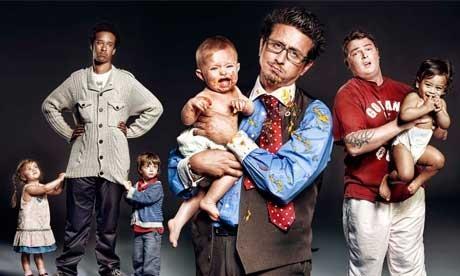 “How anyone could possibly think that getting three useless blokes to work in a nursery for a week had legs is beyond me. [The problem] was the sheer plodding inevitability. Absentee fathers are a genuine social issue and well worth investigation, but Daddy Daycare managed to avoid anything of any depth… More than this, though, the programme was equally insulting to women… Still, the good news is that the men did become slightly more child-friendly; the bad news is there’s another episode next week.”
John Crace, The Guardian

“A C4 reality series designed to address a social crisis that almost certainly doesn’t exist. The implication that today’s men are unusually bad at fatherhood is surely not true…The truth of it was…the production company [wanted him to fail]. And even they only wanted him to fail a bit comically in the first half so that he could recover in the second.”
Tom Sutcliffe, The Independent

“It might seem pernickety to point out that a lot of the programme felt engineered…However programme-making needs to have a default setting of honesty so that even in the most set-up of settings the truth is allowed to come out. It seemed what came out here was exactly what the producers had scripted.”
Matt Baylis, Daily Express

“Stefan…mused after the drill exercise “I get the feeling sometimes that the staff want us to fail”. I got a similar feeling about the programme (director/producer Chloe Huntly). Was its assertion that Britain has a “generation of dysfunctional dads” even true? Yet its end message was different from its premise.,,These engaging dads came to the rescue of something very ordinary.”
Andrew Billen, The Times

ROGER AND VAL HAVE JUST GOT IN, BBC2

“No jokes. No banana skins. Utterly brilliant. Get into it if you haven’t already.”
Matt Baylis, Daily Express

“Bridges is one of the funniest comedians around at the moment. Yet it’s not a total pleasure either, as the series so far feels disjointed… Things that shouldn’t be funny sometimes are, and things that should be aren’t. Trying to understand it makes joyless viewing.”
John Crace, The Guardian