“We got the message Wilson was making. Had got it in fact long before he had tried to pass it on.” Read on for the verdict on last night’s TV. 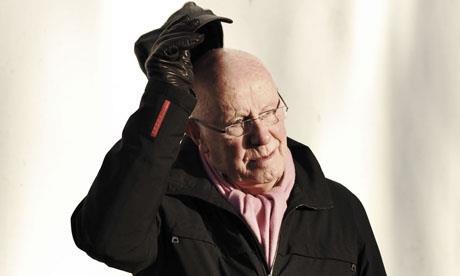 “It was fine as far as it went, but you were left feeling it perhaps hadn’t gone quite far enough. You hardly need to prove to an audience that automated call centres are an infuriating time-suck, after all, and some of that effort might have been better employed digging into the details of “retargeting companies” (who make millions out of data-mining our shopping habits) or into finding out what actually constitutes “very high call volumes” (more than three people at once, you sometimes suspect).”
Tom Sutcliffe, The Independent

“We got the message Wilson was making. Had got it in fact long before he had tried to pass it on to us. He needn’t have bothered.”
Matt Baylis, The Express

“It seems that they then realised that Richard Wilson v automation, while very amusing, isn’t in itself enough to fill an hour of television – so the film meanders off into how web browsers collect information and build up profiles of us. Yeah, cookies and all that. It’s very interesting, and important, but it seems to be a whole different area.”
Sam Wollaston, The Guardian

“The policemen supply the commentary here in post-mortem interviews, rather than some ex-newsreader full of gung-ho law’n’order boosterism. And in their rueful grins when asked some question they’re aware they can’t answer entirely candidly, the truth about real policing leaks out. It’s not always a flattering truth either.”
Tom Sutcliffe, The Independent

“There was unflinching honesty in this account og a cat-and-mouse game that plays out so intensely, it’s no wonder that professionals are very occasionally pused to the limits of reasonable behaviour, by people already way beyond it.”
Alex Hardy, The Times

“If this show was pitched at a sensible weekend family viewing slot it’d be getting the royal thumbs-up all round.”
Matt Baylis, The Express

Secrets of the Shoplifters, Channel 4

“Jamie: an easy geezer and reformed pro thief who glued this documentary together with his breezy patter. As he took us on a tour of the places he used to nick from, he bantered with shopkeepers (now his friends), dissed Primark (“too cheap”) and held aloft two vibrators in Ann Summers, explaining that in his heyday he would have got “a tenner for the pair.”
Alex Hardy, The Times

“It’s no laughing matter though. Shoplifting is on the increase, up 12% in a year. This country is now the shoplifting capital of Europe. And it’s not just our celebrity chefs doing it – everyone is. Well, a third of us admit to having done it at some time in our lives. And most of the others are probably lying. The odds are stacking up against Steve and Dan. They do manage to catch one criminal – a small, middle-aged woman with glasses.”
Sam Wollaston, The Guardian