“It’ll never get boring because no two families can ever be the same.” Read on for the verdict on last night’s TV. 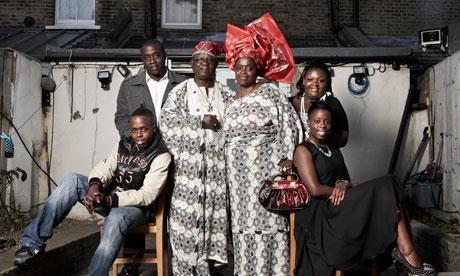 “It’ll never get boring because no two families can ever be the same; each series will have its own character without any bunch of TV executives having to sweat over giving it one. No novelist or poet could have put it better, nor could they have up come up with anything quite so richly entertaining as a simple look inside a modern British family.”
Matt Baylis, The Express

“The four children – from 27-year-old son Ayo to 15-year-old daughter Ola – are culturally of dual citizenship, British through and through but linked by birth to Nigerian traditions and style. But what’s unique to them – as far as a general British audience is concerned – quickly gets eclipsed by what isn’t.”
Tom Sutcliffe, The Independent

“I was expecting more drama from this year’s family, the Adesinas, for no better reason, I confess, than that they were church-going British-Nigerians and African churches are a rare sign of life on a Sunday morning in London.”
Andrew Billen, The Times

“Perhaps this was an art work in itself – or an allusion to one – since one of Ai Weiwei’s early pieces showed him smashing a valuable Han dynasty urn. Either way it was a smashing bit of film, effectively solving the art documentary’s perennial difficulty in making aesthetic discrimination dramatic to watch.”
Tom Sutcliffe, The Independent

“That rare edition of the art strand that left you wondering not why Yentob was sucking up to this egomaniac but why you had not heard more about this first-order genius.”
Andrew Billen, The Times

“Tyson’s life has really been one big fight, in the ring, out of the ring, against the world, mostly against himself. Now he’s tired. And it’s hard not to feel a bit sorry for him, as well as being terrified of him, obviously. I’m thinking of getting one of those Maori facial tattoos like he’s got; it might make people take me more seriously.”
Sam Wollaston, The Guardian

“Taggart once featured a transsexual school cook who’d returned to a institution where she’d been a bullied schoolboy to wreak a terrible revenge on the staff. It would be hard to think of a show less like Taggart than CSI: Miami but the basic theme of last nights story was similar.”
Matt Baylis, The Express