“He said what he saw was amazing but not in that weird, hippy, mystical way that Professor Brian Cox does.” Read on for the verdict on last night’s TV. 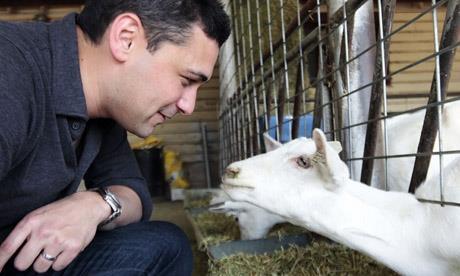 “The content itself, once he got to it, was genuinely interesting: the boom in synthetic biology, which deals with how new organisms can be synthesised out of mail-order parts. Essentially we’ve worked out how to hack the operating systems of living things, tweaking the DNA code so that a yeast cell excretes diesel fuel instead of alcohol, or an E.coli bug fluoresces under ultra-violet light.”
Tom Sutcliffe, The Independent

“Presenter Adam Rutherford might have been mugging up his own sense of wonder for the cameras but he seemed genuinely blown away to find do-it-yourself DNA clubs in middle America where parents and children were knocking up genetically modified bacteria as a weekend pastime.”
Matt Baylis, The Express

“Rutherford was a good guide. He said what he saw was amazing but not in that weird, hippy, mystical way that Professor Brian Cox does. More importantly, he more than hinted that “playing God” in the lab is likely to be mankind’s nemesis as its salvation.”
Andrew Billen, The Times

“Both families seemed pretty happy, it has to be said, and neither mother looked remotely ready to stop. “Never say never,” said Mrs Radford, which may explain how she’d ended up with 15 children.”
Tom Sutcliffe, The Independent

“Tacitly, the programme-makers have decided that the sheer size of their family constitutes a disorder, for which the seeds must be sought in a classic, pop-psychoanalytic fashion. But I wondered about this – they’re eccentric, for sure, and it amounts to more than a child fetish, also a laundry and a washing-up fetish. But if they are acting out the demands of their rejected inner child, it seems to be making them quite happy.”
Zoe Williams, The Guardian

“Perhaps siblings can provide the things mums and dads provide in smaller families. I’m not sure, which is why I wish this programme had shown me more of the children and rather less of the parents.”
Matt Baylis, The Express

“The diary-format, where they wrote what they thought and then read it out, was just about as bad an idea for a voiceover as anyone has ever had. But the kids themselves were wonderful: moving, sobering and joyful.”
Zoe Williams, The Guardian

“It is an entertainingly slick American legal drama that contains its own modifications to the genre.  Into the format of slick lawyers talking fast – LA Law to Boston Legal – enters the DNA of the maverick genius logician show.”
Andrew Billen, The Times